Island time: The unique biology and geography of island habitats 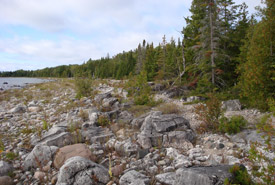 Cockburn Island, ON (Photo by NCC)

While many Canadians are headed south to escape the frigid temperatures with some island time, we at the Nature Conservancy of Canada (NCC) are warming ourselves by getting to know the islands closer to home, and the species that live in them.

Ferguson vividly remembers her encounter with the “gigantic” species: “It was the biggest American toad we’d ever seen — it was at least three times as big as a regular toad,” she recalls. “I'll never forget the way his grandiose stature underscored the breadth of his feet, the size of his warts and the fact that he was sort of sauntering, rather than hopping out of the way.”

The toad's size in comparison to its mainland cousins is a great example of the unique evolution that occurs when species are isolated in habitats such as Cockburn Island — an NCC property west of Manitoulin in Ontario. 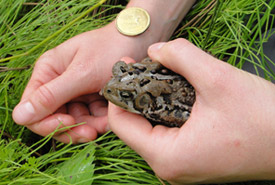 “Because of the isolation, species on islands like this toad can, over time, evolve into a larger or smaller version of mainland populations. It’s a great example of dwarfism or giantism — a unique side-effect of island biogeography,” says Dan Kraus, conservation science manager for NCC’s Ontario Region.

Islands are unique habitats. They tend to have fewer species than mainland habitats, including fewer competitor species. This lack of competition can lead to large populations of some species, but can ultimately be harmful to the species’ numbers. Without predation, it’s easier for a population to deplete its food sources, and in turn, experience population loss.

“Islands tend to have fewer species than mainland habitats, including fewer competitor species." (Tweet This!)

But lack of competition isn’t the only factor that influences the balance of species on islands. Tim Ennis, west coast program manager with NCC, says that these isolated species and habitats are also influenced by the size of the island and its distance from the mainland.

Islands also have a limited cache of resources, which forces species to adapt. With limited resources, island inhabitants need to limit their energy intake, which will gradually affect the way in which the species develops. 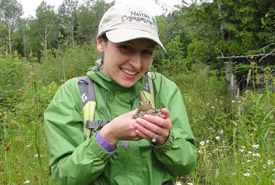 Great diversity in the Great Lakes

Most islands throughout the Great Lakes — and most of Canada — are young from an evolutionary perspective. Kraus notes: “Islands elsewhere — the Galapagos for instance, where there are some of the most exotically evolved species — have had tens of thousands of years for evolution to take its course, but our islands are just in an early stage now.”

Because these spots are mostly secluded, there’s a limited gene pool and less opportunity to repopulate should a species experience a plight in numbers. This can pose a problem when species are introduced to this seemingly abundant amount of food.

“Caribou can swim out to islands in Lake Superior, or travel over ice and sometimes stay. There’s lots of food, but they can eventually over-browse the island and their population suffers because these depleted resources can’t recover quickly enough,” says Kraus.

Because NCC has conserved many coastal and island properties, our conservation teams are able to observe this kind of rich — and evolved — biodiversity firsthand. NCC’s habitat conservation work, along with raising awareness about the land in the water, is critical for biodiversity. These exceptionally diverse lands need us to help them remain that way. 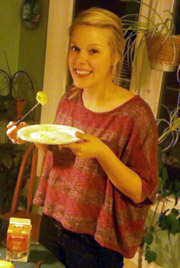