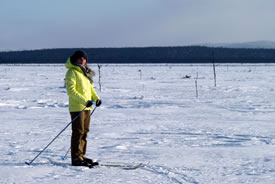 If you are a wilderness lover, or an adventurer of any kind, Labrador should be on your list of "must sees." Labrador (or "The Big Land" as it is sometimes called) stretches across vast expanses of tundra, taiga and boreal forest. Anglers from around the globe come to fish its pristine, free-flowing rivers for wild Atlantic salmon, Arctic char and brook trout. Its Torngat Mountains are the highest peaks east of the Rockies. 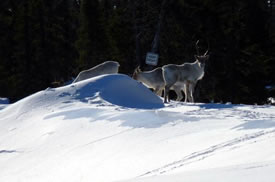 Labrador represents one of the last strongholds for mammals like wolf, lynx and marten, whose territories have shrunk or been abandoned across much of North America. Many come in hopes of seeing the George River caribou herd — once the world’s largest herd of migratory caribou — travel extraordinary distances to their calving grounds each year, or polar bears hunt seals up and down the coast. The province is famous for its massive colonies of breeding seabirds like Atlantic puffin, razorbill and common and thick-billed murre. Or perhaps you are interested in the Wonderstrands of Viking sagas, which is also the longest undeveloped beach on the Atlantic seaboard. 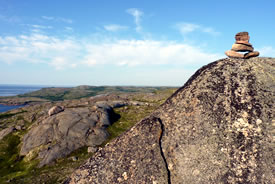 The barrens, Labrador (Photo by NCC)

The lure of the frontier

Frontiers lure the curious with the promise of an exciting challenge, the potential for discovery. They push us to go beyond the current limits of what we know. So much of Labrador’s nature remains a mystery. Questions about which plants and animals occur here, in what numbers, and where in geographic space, continue to be explored. Many places are still only accessible by plane, and there are still immense parts of the region that few people have ever been to.

It’s not hard to see why the New York Times listed Labrador as one of four "up and coming" travel destinations in 2011, describing it as one of North America’s last frontiers. But frontiers are both sexy and scary. Frontiers conjure images of places that are wild, untamed, undeveloped, unsettled. Labrador spans nearly 300,000 square kilometres, and its total population counts fewer than 26,000 individuals. That’s an area larger than all of the Maritime Provinces and the island of Newfoundland combined (or about half the size of Texas)! What’s even more incredible is that less than one percent of this massive landscape has been touched by industrial development. In fact, south-central Labrador harbours one of the 10 largest remaining intact forests in the world.

A new frontier for NCC

Labrador was a frontier for the Nature Conservancy of Canada (NCC) too, when it opened its office in Happy Valley-Goose Bay in 2009. NCC was invited by partners to bring its experience and expertise in conservation planning to this vast boreal region. NCC had previously completed 18 large-scale conservation planning projects from coast to coast across southern Canada. These are collaborative ventures between many organizations and agencies involved in resource management and land-use planning. Over a period of six months, NCC assembled a group of professionals with a common interest in conservation and land-use planning in Labrador. 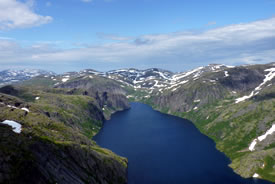 Not surprisingly, we learned a lot from our project partners. The first important lesson was that the tools and frameworks used for planning in southern landscapes were just not going to cut it in Labrador. In southern Canada, we are often looking for "the best of what’s left," but in Labrador, we had an unprecedented opportunity to explore "the best of the best."However, we needed a fresh, new made-in-Labrador approach.

The second revelation was that Labrador had little high-quality information about its species and ecosystems that was being shared freely, especially at a Labrador-wide scale. So we decided to focus our collective energies to gather, improve and create the key information needed for good land-use planning.

The project spanned over four years and represented a major step forward for land-use planning in the region. When it came time to decide how we wanted to share the results of this project, NCC and its partners decided to pursue something different. We wanted to create a “living document,” where information could continually be updated over time. We wanted to make exploring Labrador’s natural world easy, fun and accessible for as many audiences as possible. We wanted to appeal to students and teachers, Aboriginal organizations, research groups, government agencies, industry, non-government groups and Labradorians in general. We wanted to continue the dialogue that had been started, and to maintain collaborative partnerships beyond the life of the project. We wanted to create a one-stop hub where decision-makers would have access to the information they needed to make good resource development and land-use decisions, because access to better information leads to more informed decision-making.

What we came up with was the "Newfoundland and Labrador Nature Atlas" — an interactive web mapping site that allows users to discover Labrador’s natural environment in space, by navigating to different places like they would in Google Earth. Users can look up their house, their community, and explore the natural features around them. They can investigate important areas for seabirds, rare plants, Atlantic salmon, large wetlands or areas with mineral development potential for example. Users can also create and publish maps for presentations and reports. Much of the information will also be available for free download for users of geographic information systems (GIS). 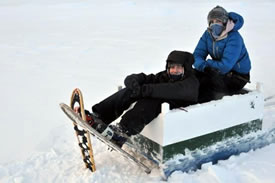 Through an exciting new partnership, the atlas will be jointly managed and maintained by NCC and Grenfell Campus, Memorial University of Newfoundland. The website will be launched in 2014, with the goal of having content available in English, Inuktitut, Innu-aimun, and French.

In an age of cell phones, tablets and mobile apps, NCC and its partners are finding new ways get people engaged with exploring information about nature. So the next time you are dreaming about a trip to exotic Labrador, why not try being a virtual tourist first? 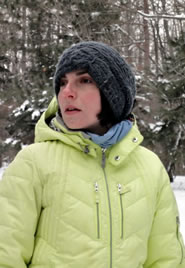