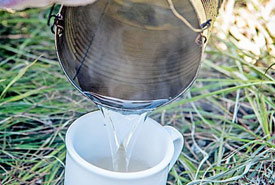 Not much colour in the Labrador tea, but amazing flavour. (Photo by Paul Smith/ Special to The Telegram)

I returned yesterday from Labrador, the Big Land, so vast and magnificent, with waterways that may never have floated a trout fly. There are not many places like Labrador left on our planet. We need to stay on our toes to protect it, us folks who find solace and peace in wild places. Not everybody cares. There are those who only see money and potential development, not that I have anything against economic prosperity, but we must strike a balance.

Although I have visited the Big Land many times, I have never before tasted Labrador tea. I had the opportunity and I was all over it. How could I miss out on the chance to experience such a visceral, and time-honoured backwoods tradition.

What would I be doing in Labrador in early September? Is there a better place to spend Labour Day Weekend? I don’t think so.

The massive deep-bellied brook trout that swim the cold pristine waters of Igloo Lake are moving into the rivers to mate and produce baby brookies. All inflows and outflows are potential locations to catch trout, as well as any steadies or gullies that might interrupt the laminar nature of brooks and rivers both big and small. The trout are concentrated this time of year, making for some spectacular fly fishing opportunities. If you haven’t figured it out already, I spent the last week of the trout season at Jim Burton’s world class brook trout camp on Igloo Lake. 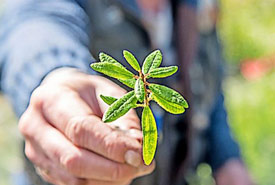 Labrador tea (Photo by Paul Smith/Special to The Telegram)

I’ll write more about my autumn angling experience another time, but for now let’s talk Labrador tea. According to Wikipedia, Labrador tea is the common name for herbal tea brewed from the leaves of three closely related slow growing shrubs with evergreen leaves. I won’t get into the long Latin names that separately identify the plants scientifically, but each seems to grow in a distinct geographic region of Labrador, specifically, the north, west and bog lands. I suspect I was drinking bog land tea in the headwaters of the Eagle River area. If any of you might be more knowledgeable about this, I’d love to hear from you.

There’s lots of history and anecdotal information on uses of Labrador tea. Incidentally, this plant doesn’t just grow in Labrador, as the common name suggests. It is found all across northern regions of North America from Alaska to Labrador, as well as Greenland.

So as you would expect there is a rich medicinal culture of its use with indigenous people from west to east. Labrador tea has been used in folk medicine for coughs, chest and kidney ailments, headache, rheumatism, diarrhea, sore throat and malignancies. 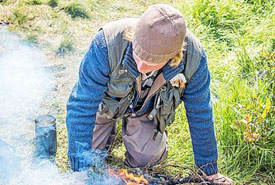 Colin Preston tending his fire. (Photo by Paul Smith//Special to The Telegram)

There’s not much documented science on this stuff, so if you decide to try it in the medical context, please proceed with caution. Many websites warn of overdosing on concentrations of Labrador tea with intoxication and dire physical symptoms. But a simple cup of tea will do you no harm. The French Canadian coureurs-des-bois used Labrador tea to extend their supplies of black tea.

Back to Igloo Lake. We were walking down the trail that leads from the lodge to a pool on the lake’s main outflow named Archie’s. There were three of us, our guide Colin Preston from Corner Brook, Andy Gould, my fishing partner from Nova Scotia and me. It was rainy and cold and we had every intention of enjoying a warm rousing fire and some tea. Colin pointed to a small green plant and told us it was Labrador tea.

"I've always wanted to try that," says I. "Let's do it," says Andy. Colin picked some plants and we were again dodging along the meandering north woods trail.

It wasn’t long before we caught some dandy trout, but that’s story fodder for later. 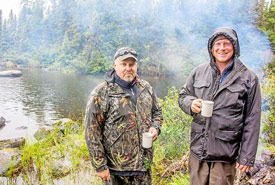 Colin Preston (right) and Andy Gould have a brew. Hot tea can certainly warm the soul and lift spirits. (Photo by Paul Smith/Special to The Telegram)

Colin’s roaring fire broke the dampness and chill. We sat around the blazing logs warming our hands and souls.

Colin detached the leaves from the plants and dropped them into the boiling water. After a few minutes, he poured us steaming cups of the most flavourful, full-bodied tea. There wasn’t much colour, but what a wonderful taste. I liked it, and if you ever get the chance be sure and give Labrador tea a try — just be careful about over indulgence. I had a spot of gas in the belly and it cleared right up, hardly evidence up to scientific rigour, but you never know.

This article was first published in The Telegram and is reposted with permission on Land Lines. 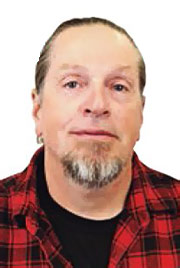 Paul Smith is an outdoor writer and photographer from Spaniard's Bay, Newfoundland. He wanders the world chasing any fish that will bite a fly.