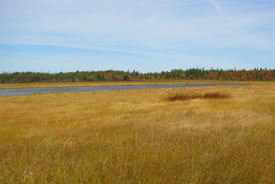 In the fall of 2014 my colleague, Rachel Deloughery, and I travelled throughout Prince Edward Island in search of lichen. We visited 63 locations that had the potential of being good lichen habitat. Many of the areas were rich with lichens, but the site with the greatest number of species and the greatest number of rare species, was the Nature Conservancy of Canada's (NCC's) North Enmore Nature Reserve. We found 122 species,  15 of which have never been reported elsewhere on PEI.

The lichens in the nature reserve suggest that it is a healthy environment with good air quality. To understand why lichens are good bioindicators, however, you have understand what lichens are and how they work. 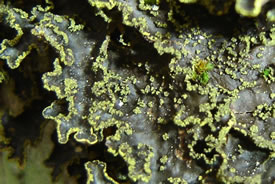 Lichens are composite organisms; in other words, they are multiple organisms working as one. On one side of this relationship is a photosynthesizer, which produces the energy or carbohydrates for the lichen. The photosynthesizer is an algae or a cyanobacteria or in rare cases, both. On the other side of the relationship is a fungus, which houses the photosynthesizer. The fungus forms the body of the lichen and acts like a sponge, absorbing nutrients directly from the atmosphere and precipitation or water that washes over it.

Unfortunately, any air pollution  or acid rain will also be soaked up by the lichens. The tolerance of lichen species to different types and amounts of pollution varies, which is one reason they are good bioindicators. Another reason is that most species require very specific environmental conditions to survive. If the amount of moisture, humidity, light, temperature or pH of their substrate is altered, even slightly, lichens will let you know.

Lichens are the canaries in the coal mine. They will be the first to respond to disturbances, from climate change to air pollution. To use lichens as bioindicators, however, you also have to know the species. Some species are tolerant and can grow in a wide range of environmental conditions. There are even some that can tolerate urban living, but most prefer undisturbed areas far from sources of air pollution.

The sites we visited on PEI that were rich with lichens affirmed our notions about where most lichens like to grow. We found the greatest numbers in relatively large tracts of old-growth forest that had sustained high humidity. These sites were always far from cities and other disturbed areas, such as agricultural fields where drifting fungicide applications can impact lichen populations. 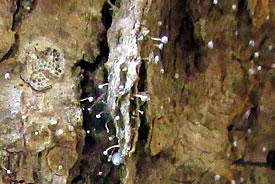 Not surprisingly, the North Enmore Nature Reserve was the most isolated area we visited on the island. The reserve covers approximately 194 acres (79 hectares), but it is surrounded by substantially more forested land on all sides except where it borders Percival Bay. The forest buffering the reserve has no trails and many parts have dense brush that is difficult to traverse.

The only reasonable way into the reserve is to walk along the beach for one to two kilometres while the tide is low. This seemed like a good option, until we discovered how great this site is for lichens. We wanted to spend more time than the tides and short daylight of autumn would allow. As a result, we ended up wading/swimming out at dusk most nights. We spent many days in the reserve because the lichens were spectacular, and we continued to return as long as we kept finding new species. 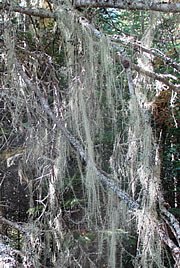 Lichens ARE spectacular. They are the coral reefs of the forest. Like coral they come in a myriad of shapes and colours, in addition to being multiple organisms working together and being sensitive to disturbance.

In the reserve we found many rarely seen intolerant species, which were wonderful to encounter because they have uncommon colours and shapes. For example, we discovered the only population of yellow specklebelly in PEI, which is a brown lichen fringed with bright yellow powder. We also found the sensitive Methuselah's beard lichen, which was the original Christmas tree tinsel, but it is too uncommon for that now.

The rarest lichen we encountered is so uncommon that it does not have a common name. Its scientific name is Sclerophora amabilis and it belongs to the stubble lichen group, named for their resemblance to facial stubble. I was only able to find seven other records of this rare species in North America!

One of the reasons I was excited by what we found in the reserve was because, as a lichenologist, I see the common species all the time. New species are exciting for me, but for most people even the common ones are exciting. Once you are tuned into lichens (i.e., getting your "lichen eyes") you will start to see them everywhere, even your own backyard, but you have to be able to appreciate the small things in life.

Lichens may be beautiful, but they are also important to the healthy functioning of most terrestrial ecosystems. They contribute to nutrient cycling, reduce soil erosion and are food, nesting material and camouflage for wildlife. The conservation of habitat for these organisms is important on many levels, which is just one more reason why the protection of places like the North Enmore Nature Reserve are so significant. 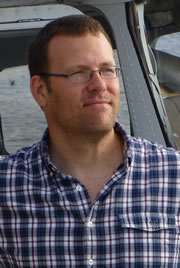 Troy McMullin is a lichenologist, forest ecologist and conservationist.