Life is a highway 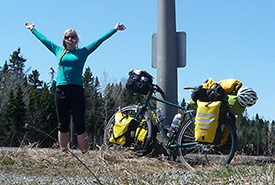 I learned about Anna Heslop though an email from a colleague that contained a link to her blog and a subject line that implied a potential story. The description in the message was brief — she was biking across Canada and fundraising for NCC — but it caught my attention.

My job as a communications intern at the Nature Conservancy of Canada (NCC) entails a continuous search for story content, and I’ve learned to never overlook a lead. I began scrolling through Anna’s blog and skimming through the details.

I learned that Anna was 25 years old, only a year younger than myself, and a far braver and more experienced traveller than I am. I don’t consider myself a novice traveller (I did spent six months backpacking around Australasia and Southeast Asia) but I can’t even begin to fathom cycling 6,200 kilometres across the Great White North by myself. Beyond the physical demands required, my two weeks bussing across Cambodia alone can’t even begin to compare to trekking across Canada without companionship.

Within her posts, I discovered a vibrant personality, a passion for adventure and an enthusiasm incapable of being extinguished.

The farther I read into the blog, the more impressed I became. Anna boarded an airplane at the London International Airport bound for Canada on March 29, 2014 for a six-month trip (three of which would be devoted to cycling from Bathurst, NB, to Vancouver, BC, and the remainder spent exploring the country). 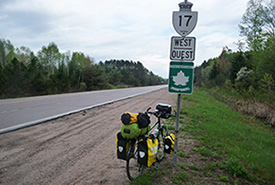 All of Anna's gear, packed on her bike (Photo courtesy Anna Heslop)

(I tried biking round trip from Canmore to Banff once, and I was sore for the better part of a week, so I can’t even envision cycling an average of 80 kilometres day after day.)

For 14 days in April, Anna volunteered at an organic farm outside of Halifax. The following two weeks were spent camping and hiking in Newfoundland and Nova Scotia, and from the photographs she posted, it’s pretty obvious that the weather wasn’t what I’d consider "camping weather." Maybe I’m a bit soft, but I grew up in the mountains and I’ve pitched a tent in the snow, so I don’t think I’m necessarily a fair-weather camper. Regardless, I was impressed by Anna’s determination.

Her travel blog followed her progress as the days passed and the cycling portion of her journey began. She set out from Bathurst on May 2, and I read about her initial excitement and then the struggles once the trip was underway. Every post included photos of landscape and wildlife, and her stories told of significant milestones and border crossings. From snow covered trails in Quebec to scenic Lake Superior, I experienced the trip vicariously through Anna’s blog.

It took a couple of weeks and a series of emails to finally arrange an opportunity to talk, and when I finally caught up with Anna she was in Winnipeg, MB, and anticipated arriving in Vancouver at the end of July. We Skyped one afternoon at the end of June, when she was midway through a primitive wilderness survival course, and I finally got to talk with this traveller about whom I had already learned so much.

From her posts, I’d gotten the impression of a bright, passionate, optimistic individual. Speaking to her reinforced my opinion.

She told me about her first day of biking, when she returned the rental car to the lot and was standing on the pavement will all her bags laid out on the ground.

“I was suddenly like, ‘What am I doing?’” she remembered. “I’d never even put all my bags on the bike before. I did a couple laps of the car park and thought it was going to be awful. I had no idea what I was doing.”

Anna told me about the wildlife she’d seen: moose, bears, wolves, beavers, muskrats and bald eagles; and about her favourite landscape to cycle through. (She said Lake Superior, but I’m pretty sure that’s only because she hadn’t hit the Canadian Rockies. I’m biased though, because I grew up in the mountains.)

I asked her about her past experience in conservation, and why she chose to fundraise for NCC.

“If I’m going to a country to look at the wildlife, I want to donate to a charity that maintains it.

“We’ve only got one planet, and it can’t keep bouncing back if we screw it up. All it takes is a little bit of education and it makes the world a better place.”

Anna is an educated environmentalist who believes in the importance of nature conservation. She graduated from the University of Southampton with a degree in environmental science, a specialization in fresh water ecology and a masters in flood plain management. She told me about her other experiences combining travelling with conservation: the three weeks she spent researching the behaviour of Colobus monkeys in Kenya with Global Vision International, and her experience with SOS Tartarugas in Cape Verde working on loggerhead sea turtle conservation.

(After we hung up, I had more questions regarding these adventures, so I sent her an email asking for more information and not only did I receive an immediate response to my questions, but also a lesson on loggerhead turtles, because that’s just the kind of amazing person she is.

“Turtles are really cool; they become sexually mature in their thirties and the females mate with up to five males each year and save up the sperm in a pouch to fertilise her eggs and let the best sperm win! Each hatchling has a one in 1,000 chance of living to be sexually mature.”)

I was hoping to meet Anna in person, but her trip through Alberta won’t cross my path this time around. I’d like to meet her though, to tell her how motivational she is and to tell her how she’s re-infected me with the travel bug I’d tried to leave behind in Thailand. Hers is a great story, and I hope it will continue to inspire other people the way it has myself.

Follow Anna’s adventure on her blog. To support the ride, visit her fundraising page. To date, Anna has raised $400 for NCC and hopes to continue spreading the word. 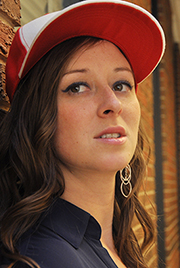