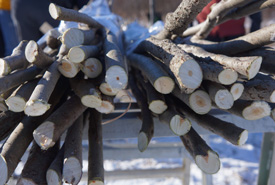 I remember raising my eyebrows skeptically when my colleagues from the Nottawasaga Valley Conservation Authority told me that we were going to be cutting branches off of shrubs and hammering them into the ground along the Nottawasaga River to stabilize its shoreline. My first thought was, "How are a bunch of sticks poking out of the ground going to accomplish that?"

I was told that these were no ordinary branch cuttings. Once planted, as if by magic, roots would spread out from the base of the stick, while tiny branches would appear above the soil and sprout leaves — turning what was once a branch into an independent shrub. These were live stakes, named as such because they were truly alive. 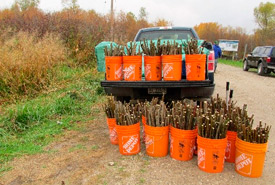 Under the soil, the intricate web of roots climbing outward from the bottom of the live stakes anchors and stabilizes soils that might otherwise be prone to erosion in dynamic environments, such as riverbanks. So, that fall, we spent days finding robust populations of native willow and dogwood trees that had just shed their leaves, and selectively took branches, varying from half to one inch in diameter, and from one to one-and-a-half feet in length. We cut the bottoms at a 45-degre angle, and collected them in bright orange buckets with a few inches of water at the bottom.

On the last day, we hauled bucket after bucket packed with stakes along the winding course of the Nottawasaga River to our planting site. With the tool of the day, the soft-blow mallet, we planted the stakes along the banks of the river, at least one to two feet apart, by pounding the pointy edge into the soil until two-thirds of the length of the live stake was buried. At the end of the day, the riverbank looked comical, with hundreds of little sticks poking up above the soil surface. 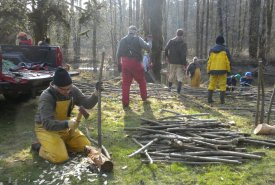 Over the next six months, those live stakes decided it was their turn to be independent shrubs. They put down roots, shot out branches and eventually leaves to catch the sunlight. Today, the shoreline, once peppered with the heads of little sticks, looks like a lush and leafy early shrub thicket. And that’s just what's going on above the soil.

Down below, the soil of the Nottawasaga River's streambanks is locked down by the plants' roots, ensuring their future integrity and stability. Not to mention, the shade that the shrubs provide to the river, and eventually the trees that will succeed them, are improving the habitat for fish and other aquatic species. Streamside vegetation provides shade on the water below, keeping developing eggs cool after fish have spawned. In addition, the leaves of these shrubs attract terrestrial invertebrates that fall into the water and feed species such as salmon.

Any shrub that lives and thrives in moist conditions can be used in a live staking project. Just remember these key parts of the process:

Then sit back and watch the magic happen.