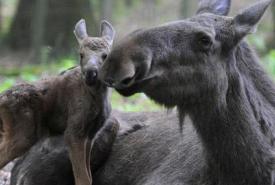 It's amazing how turning an issue on its head and looking at in a different light can make all the difference. At least that seems to have been the case for a cross-border conservation project that, at first glance, seemed like many of the others we at the Nature Conservancy of Canada (NCC) have been working on for years.

A few years ago, staff in our New Brunswick office were describing a new project to protect a wildlife corridor along the Chignecto Isthmus, which is the only land connection between Nova Scotia and New Brunswick.

"It's like we're giving moose in New Brunswick (where they are common) a chance to travel to Nova Scotia and find a mate with moose there (where they are endangered)," mused New Brunswick Program Manager Paula Noël one afternoon. From there, the seed was planted and the project was cheekily nicknamed the "Moose Sex Project." But none of us could ever have imagined the popularity this name would bring to the project.

Since launching in 2012, the Moose Sex Project has gained international attention. And that doesn't seem to be stopping anytime soon.

In doing so, we earned over 50 media stories around the country after I reached out to local and regional newsrooms.

CBC and Canadian Press stories resulted in a story entitled "Moose Get A Room" that got picked up in several newspapers, including the Edmonton Sun.

Then yesterday, I received calls from Alistair Baker Coleman of the BBC in England and Michel Comte of the Agence French Press Agency (based in Ottawa), which led to two more stories:

Their stories on the Moose Sex Project have gone worldwide and have spread like wildfire on Twitter. For those of you with Twitter accounts, simply type in "moose sex" in the search box and you can see for yourself.

Last night, the projet was referenced on This Hour Has 22 Minutes, where we were mentioned in a short but funny spoof (see it at around the 19-minute link).

The resulting coverage has led to emails to our office requesting Moose Sex buttons and people asking how they can contribute, including a contribution from Texas and inquiries from Hong Kong.

While we're still all a little surprised by the attention this cheekily named project has generated, we're grateful for the support we've received from around the world.

The moose, and their mates, thank you for it! 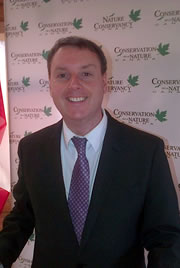 Andrew Holland is NCC's communications and government relations director for the Atlantic Region.