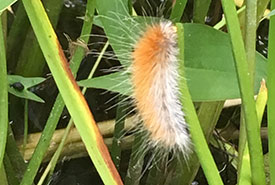 A Nature Conservancy Canada (NCC) email popped up: "Big Backyard BioBlitz,” September 24 to 30, 2020! That sounded both appealing and doable without the risk of COVID-19 exposure. I would go to Pike Lake Provincial Park, where there are a variety of habitats.

Day 1: NCC offered an entry into a draw for those who covered a line on one of five bingo cards or who made 30 observations. Thirty seemed like a good goal for me. I downloaded the iNaturalist app onto my cell phone, read about how to get started and stepped outdoors. I did a circuit of a lot. By the end of the afternoon, I had 28 observations, including a giant mayfly that landed on my arm. Didn’t it know it was almost fall?

My observations were of wild and cultivated plants, but I learned that iNaturalist prefers naturally occurring observations. Although I had almost achieved my goal, I was enjoying the process so planned an outing on the lake.

Day 2: The next morning I was paddling on Pike Lake by 7:30 a.m. I didn't get far from the dock! I managed to explore the lakefront of only five lots. Four lakefront lots were lined with rocks but one lot was natural growth. This one yielded delight after delight, including plants, snails, insects and action!

I watched a bladder snail stretch out of its shell (1), then retreat into it and turn a complete circle with only its tail/foot exposed (2) from time to time. There were marsh ramshorn snails and a giant pond snail too. A water lily leaf beetle crawled up onto a lily pad. It caught up to a water strider, but they seemed to get along. I discovered a common green darner (3) attached to the blade of broadleaf arrowhead, with its wings not yet unfurled. There were numerous remnants of its cousin nymphs’ molts as they transitioned from larvae to adult dragonfly and left behind their empty shells (4). I saw a small roll of material — possibly created by the movement of the water — but it moved and appeared to be choosing its direction, so I took a photo. The iNaturalist site suggested shrimp, but another iNaturalist participant soon suggested a caddisfly. Other iNaturalist users can identify photos for you, to help with scientific accuracy. Hunger drove me inside, where I discovered it was time for lunch!

Next, I explored the silver buffaloberry bushes edging the neighbouring farm. As I photographed the bright red berries clustered around thorns hidden by the silvery leaves, I spied a black and white spider (5) clambering over a berry its size, and behind a branch a smaller green insect (6), for which I still have no identification. A tri-coloured bumblebee (7) explored the goldenrod nearby. Then, hoping for a decent photo, I followed a cabbage white (8). I also photographed a green-striped grasshopper. 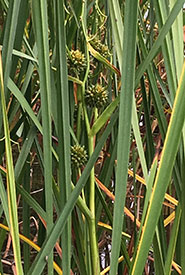 Later, I paddled north on Pike Lake hoping to sight a beaver in the evening light. I was there in time to get photos of big bur-reed, broadleaf cattails, bulrushes, another bladder snail and, yes, a beaver! I took a video of the beaver slapping its tail. It wasn’t too happy about having company!

I never did get a photo of the dragonflies flitting over the water, the fish that splashed, the frogs that jumped across the water like rocks being skipped, nor the red-necked grebe that dove before I found it in the camera lens. The squirrel and chipmunk that frequent our yard missed their portrait sittings too! It wasn’t until after the NCC Bioblitz that I was reminded that I could have added observations to iNaturalist without evidence; that is, without photos or sound recordings.

I did, however, collect some pollution while I was exploring the lakeshore: a deflated superhero beach ball and Molson beer cans. The evidence of our human carelessness is more concerning now that I’ve seen smaller organisms trying to make a home in Pike Lake. 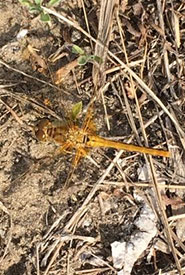 Day 3: With a warning of rain by noon, I headed out early again, this time along a path that follows the border between woods and grasses. This day it was harder to remember what plants I had already observed. Sometimes, I just didn’t know it was the same plant because it had dried or there was no flower or other clear identifier. iNaturalist prefers multiple photos of one observation rather than multiple observations of the same organism.

I found blue grama or what I know as eyebrow grass, but mostly brome grass. I was lucky to spy and photograph a red-legged grasshopper and a saffron-winged meadowhawk. 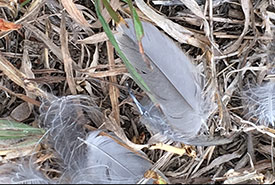 It was quite exciting after I posted the meadowhawk photo to iNaturalist to see the Libélulas migratorias curators add it and my photo of the common green darner to their observations. Libélulas migratories curators, I learned, is a Mexican-based organization with international participation to track the migration of dragonflies! The Found Feathers curators also added two of my photos to their collection. To my delight, one of my photos was chosen as someone’s “fave”! Not sure that a waterlily leaf beetle larvae would have been my choice as a favourite, but I was happy to have a photo faved/chosen! 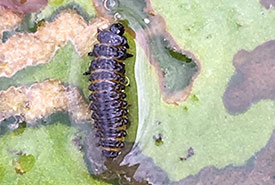 I had noted the option to play NCC bingo cards. In spite of getting carried away with my project and making 168 observations, of which there were 104 verified species and possibly 126 different species, I never was able to make a line of five observations on any of the bingo cards. A challenge!

My work on the laptop took considerable time because when I added observations to iNaturalist, I tried to make species identifications myself. These three days outdoors, cellphone camera in hand, were well spent! I learned lots and had fun!

You don’t have to wait for an NCC BioBlitz invitation! Give another purpose to some of your outings. Join iNaturalist at no cost! Take photos of what you observe or help identify some observations or both! Contribute to the recording of wildlife in Saskatchewan or wherever you are, while you avoid COVID-19. Do some learning and have fun! 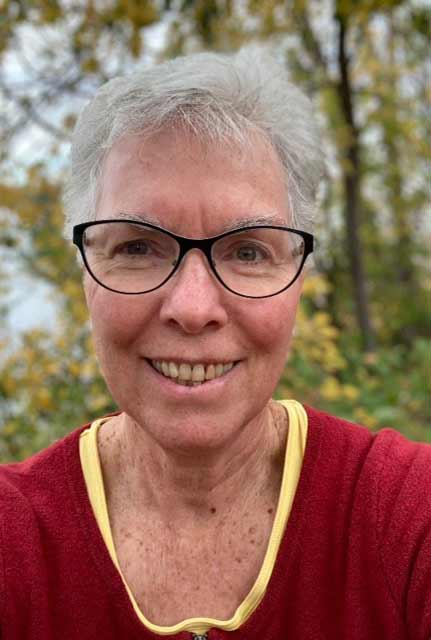 Shirley Humphries is an advocate for, a volunteer with, and a donor to NCC Saskatchewan.