My snowy day...And tips for non-intrusive enjoyment of snowy owls 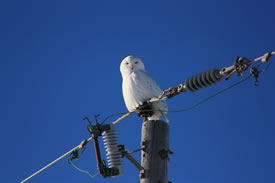 This snowy encounter was a long time coming, and it made my day. (Photo by NCC)

My moment with a snowy owl has been a long time coming. In late 2013 I wrote about my attempts to find one during the Guelph Christmas Bird Count and I spent many wintery days in 2013/2014 driving down country roads peering hopefully into fields and at the tops of light standards. I knew snowy owls were experiencing an irruption (a population spike related to rapid reproduction guiding a species into new territory to find resources), and with sources telling me this was a “once in a lifetime event” or that mega-irruptions like these can have centuries between them, I knew I had only a short window to snag a sighting.

Sadly, I didn’t find any snowy owls in 2013/2014 and thought I had missed the boat to add this bird to my life list. I couldn’t have been more pleased when November 2014 rolled around, and guess who was back, showing higher than usual numbers yet again? The snowy owl! I just knew in my gut that 2014/2015 was going to be my winter, especially when I learned that a year like this, following an irruption, is known as an “echo,” in which comparable numbers of the subject may visit an area again.

I chased a few local sightings reported through a birding email service I subscribe to, but came up empty handed each time. However the stars aligned on Tuesday, January 20 when I was due at a meeting two hours north of where I live, where I knew snowy owls were more regularly spotted. Without a real plan, I went north.

As I drove, my eyes scanned and scanned fields and fence posts and light standards in between keeping my eyes on the road and making sure I maintained the speed limit! I was interested in white blobs, possibly with grey specks, anything standing out against the snow-white fields and blue skies. During summer fieldwork, we call this “the search image,” in which your eyes are trained to look for something in particular and you can do it almost at the exclusion of seeing other landscape features.

At one point I turned my car around to go back and check out a white blob in a field, which, sadly, turned out to be just a blob of snow…

Eventually, my relentless searching and scanning finally paid off when south of Collingwood, my head spun left and I slammed on the brakes (carefully). That big white shape on top of the hydro pole: could it be?! I nudged my car down the sideroad until my subject came into view and then can’t even describe the grin that exploded across my face, and I laughed out loud in delight; it was a snowy owl.

I snapped a couple of insurance pictures before getting out of my car, armed with “the big lens” on my camera that I’d brought just for this purpose. I kept a safe distance from the bird, as it intermittently scanned the field below it and peered over at me curiously. I snapped some of the most beautiful pictures on one of the most beautiful afternoons of my life, and said a tender goodbye (yes, out loud) to my friend, before moving on. 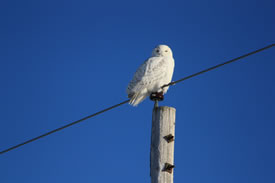 After a celebratory cookie at a nearby Tim Horton’s, I was ready for more owls! Now on a sugar high as well as a birding high, I was sure I could find ONE more owl before my meeting. I knew roughly where I wanted to head, an area of rural roads and agricultural fields. Just after I made my first turn into this area, lo and behold, another snowy was sitting atop another hydro pole.

I stopped my car closer to the owl this time, as I’d registered its presence when I was only two hydro poles away, and I could feel this owl watching me much more closely than the first I’d seen. I could I feel that I was somehow a distraction to this owl, who was less focused on hunting and more on me. Knowing how much energy it takes to flap those giant wings, I decided it was time to get into my car. Just then, it flew away from me, two hydro poles over. It was then that I vowed to keep a better distance should I see another one.

I did see another one. I actually saw THREE other ones! I snapped some great photos from a reasonable distance and the owls mostly just went about their day, much as the first one had. The fifth one I actually just drove right past. It was perched on a tree on a reasonably busy county road, seemingly unbothered by the traffic, but I decided to give it the respect of letting it enjoy the last rays of afternoon sunlight without worrying about the overly excited lady with the really cold fingers snapping a bunch of photos of it. 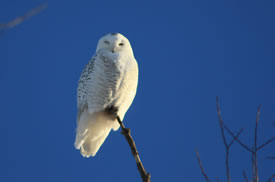 Although this snowy owl seemed unperturbed by my presence, it's best to keep a fair distance between the owl and yourself. (Photo by NCC)

The whole day really got me thinking about whether we are impacting owls when photographing them. Unused to humans in their native arctic tundra, snowy owls are seemingly mostly unbothered by the company of humans.

In the “hotspot” I inadvertently stumbled across during my snowy day, I met a photographer who told me that the same owls patrol the same fields daily and are resident in this area throughout the winter: they were there in 2013/2014, and they’re back again this year. Photographers have even given them names — I learned I was lucky to have glimpsed Charlie and Sybil (also “Dirty Girl,” named for her dark-coloured feet, whom I drove past without seeing, apparently).

I thought this was sweet, but it also gave me pause: how many people are here viewing these birds? What must a Saturday versus a weekday in this area look like? Why was the second owl so annoyed by my presence? How far back is the right distance back to view these creatures? Most importantly: how is the influx of human attention and commotion affecting these incredible animals?

Below, I've included some guidelines for the non-intrusive enjoyment of owls:

Happy owling! I hope you'll also be lucky enough to have a snowy day like mine!