Life as an intern with the Nature Conservancy of Canada 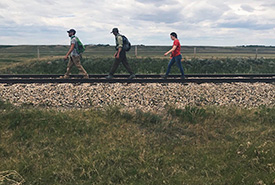 Before the summer ended and we went our separate ways, I caught up with my fellow interns to get an idea of what they do when they leave the office. (Photo by NCC)

As the former communications intern for the Nature Conservancy of Canada’s (NCC’s) Saskatchewan Region, I spent most of my summer at my desk, while our five other interns spent most of their time in the field. Before the summer ended and we went our separate ways, I caught up with my fellow interns to get an idea of what they do when they leave the office, and why they do it.

When I talked to Ashley Sahulka, one of NCC’s natural areas interns in Saskatchewan, about a work week she had back in June, she described doing piping plover surveys on Shoe Lake (they found nine or 10), doing property monitoring on NCC’s property near Readlyn and prepping to do health assessments on an NCC property near Wideview the following week. 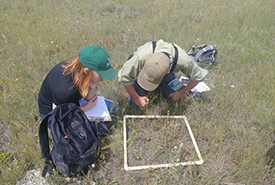 Her fellow natural areas interns, Kaitlin Baril and Lisa Hurst, and conservation engagement intern, Elan Marsall (who helped out with natural areas work), all described similar weeks when I talked to them in July: working on health assessments, doing property monitoring and spraying noxious weeds.

To me, the words “property monitoring” and “health assessment” don’t exactly inspire excitement, yet I knew that my fellow interns loved their jobs, so I asked them what they loved about them.

Ashley, who is back for her second summer as a natural areas intern said, “I learned more about what conservation actually meant and the workings of it last summer than I ever did at school. It was a lot of fun and a lot of work.”

Elan, also back for her second summer, said, “[The highlights for me were] the people and the work experience in this position. I want to continue doing exactly what I did here into my future, so I’m just excited that I got an internship while I’m still in college doing exactly what I want to do. It’s my number-one passion to engage with other people who are as into the environment and learning as I am, and to get involved with the conservation side, too. As an intern at NCC, you get to see all sides of the organization and try so many things.” 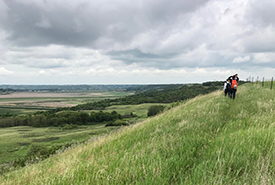 Natural areas interns Lisa and Kaitlin both said that the most rewarding part of their jobs was getting to explore their home province. (Photo by NCC)

Former geographic information systems (GIS) intern, Alayna Chan, said her highlight was bird banding, just one example of the range of experiences you get as an intern here. Alayna also said, “[I enjoy] just getting to be outside and learning from people who are experts in their field. It’s on-the-job learning instead of sitting and reading a textbook.”

Natural areas interns Lisa and Kaitlin both said that the most rewarding part of their jobs was getting to explore their home province. “Being able to be out in the field in native grasslands, which are very important and valuable ecosystems, and looking at things, such as ecosystem health and which kind of species are present, was amazing,” said Kaitlin. Lisa said her highlight was “getting to experience parts of our province that I likely never would have visited otherwise and getting to see where I have lived my whole life from a whole new perspective.”

Most of the interns also mentioned the people in their description of what made their jobs worth it. Lisa said her favourite natural area in Saskatchewan is the Missouri Coteau (southwest) region because she had the opportunity to explore it this summer with such great people: her coworkers. Ashley said the same thing about her supervisors Kylie Garchinski (natural areas manager) and Marla Anderson (natural areas assistant): “They were the best people I could have worked with and going about the province with them made me realize how blessed I was to have the opportunity.” 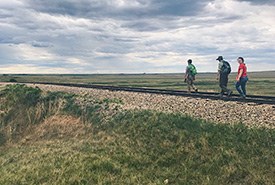 What made my time with NCC so memorable was a combination of the people and the land. (Photo by NCC)

As the former conservation engagement intern, Elan had the opportunity to connect with people outside of NCC, and she finds it equally rewarding. Last year she was doing an engagement presentation at a school near Kamsack, Saskatchewan, and there was a kid with his headphones in and head down on his desk right in the front row. Elan said seeing him so unengaged discouraged her a bit, but she just continued with her presentation on Saskatchewan’s species at risk. When she got to the part in the presentation where she described the way loggerhead shrikes have adapted to spear their prey on barbed-wire fences, Elan said the boy took out his headphones. She then noticed him gradually becoming more and more engaged as she talked about bears and played a jeopardy game with the class. “Through every slide, he just got more into it and started participating,” said Elan. “The whole class just matched my energy gradually because I was so excited to be there, and we ended up having so much fun.”

For my part, I have to agree with my peers. What made my time with NCC so memorable was a combination of the people and the land. There’s something meaningful about spending your summer surrounded by people who care about protecting our natural areas as passionately as you do.