Back in 2017, I wrote a blog detailing my ongoing quest to find a swift fox in the wild. A little over two years later, I thought I would provide an update.

Since December 2017, I have continued to spend a substantial amount of time wandering the native pastures and driving the grid roads of southwest Saskatchewan. In the late summer/early fall of 2018, the Calgary Zoo contacted the Nature Conservancy of Canada (NCC) to obtain permission to set up a camera trap on Old Man on His Back Prairie and Heritage Conservation Area (OMB).The goal was to capture photos of swift fox as part of the ongoing census work that the Calgary Zoo leads.

After the cameras were collected and the zoo staff sorted through the photos, NCC contacted the Calgary Zoo to ask if swift fox turned up in any of the photos. I was thrilled to hear that they had in fact captured images of a swift fox on OMB. However, my excitement was short-lived. When I asked if we could receive a copy of the photos with the intention of including them in celebratory blog post, it turns out there was a bit of confusion and the camera that captured the photos of the swift fox was actually located two kilometres west of OMB in the Arena Provincial Community Pasture. So close, yet so far.

I started to accept the possibility that I might never see a swift fox in the wild.

A flicker of hope

Then in late August of 2019, I got another flicker of hope. While doing a site visit with a landowner who was interested in selling land to us, the landowner and I were driving between the different pastures down a not-so-well-travelled dirt road when something caught my eye as it darted into a culvert just as we drove past it. I didn’t get a great look at it, but it definitely had a black tail tip and seemed too small to be an adult coyote. By process of elimination, it could only have been a swift fox or maybe a coyote pup. As all of this was happening, I was in mid-conversation with the landowner and didn’t want to be rude or unprofessional, so we just kept driving.

A busy fall had me on the road a fair bit, back and forth to the southwest corner of the province, with some time spent out at OMB and with no traces of swift foxes, as usual.

My last trip to OMB for 2019 was for NCC’s annual bison round-up during the second week of December. It’s a busy couple of days, with a lot of people and vehicles coming and going, not exactly the place you would expect a secretive species to show up.

There were three of us left out at the property to finish up final tasks and close up everything for the year. We were enjoying our breakfast at the kitchen table, which is right in front of the window, when there was a sudden flurry of activity in the driveway. Two animals were having what appeared to be a wrestling match. The tussle didn’t last too long and once things calmed down, it was obvious that the one animal was definitely a red fox, with its white-tipped, big fluffy tail. The other was further down the driveway, but there was a very marked difference in its size compared to the red fox.

The sun hadn’t quite come up yet, but things were just starting to lighten up. We frantically looked for a pair of binoculars to get a closer look and try to confirm the identity of the animal. My colleagues are all well aware of my swift fox saga, so I got first dibs on the binoculars.

Despite the low light, as soon as I focused on the animal, I could see that in addition to its overall lighter colour compared to the red fox, there were two black marks on either side of its muzzle. I asked my coworkers for a second opinion, as I didn’t want to jump the gun and call swift fox. We talked it out among the three of us and there really was no other option: it had to be a swift fox. It was way too late in the year for it to be either a coyote pup or a red fox kit. There was no denying it; this was definitely a swift fox! 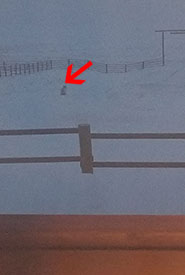 Swift fox outside the house at OMB. (Photo by NCC)

It sat in the driveway for a minute or two, waiting for the red fox to leave. Over the next 30 minutes, we watched from the different windows in the house as it cruised around the yard, coming and going from view, searching for breakfast, keeping an eye out for the red fox to come back. The red fox did come back a few times and chased the swift fox away, but the swift fox always came back within a few minutes. Eventually we needed to get our day started and had to head outside. Even then, the swift fox didn’t go too far. One of my colleagues was surprised to find it again as she was walking through our bison handling facility.

After over 10 years of searching and waiting, I finally saw a wild swift fox, in the last place I ever would have expected to. Before we left and headed back to Regina, I set up a trail camera in the yard to hopefully get some photo evidence of it.

The swift fox is one of 30 species and habitats featured in NCC’s gift giving campaign: Gifts of Canadian Nature. To learn more and to give the gift of conservation, click here. 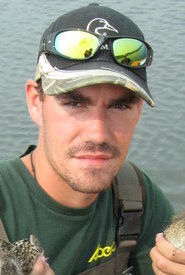