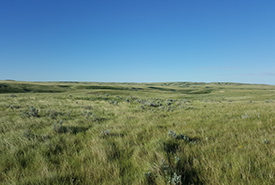 Temperate grasslands are among the most imperiled ecosystems globally. This means that across the world, this type of habitat has been and continues to be lost at alarming rates.

Grasslands occur in areas where it is too dry for trees to survive. In Canada, most grassland habitat exists in the prairie ecozone, which covers the southern portions of Alberta, Saskatchewan and Manitoba. Within Canada, it is estimated that less than 20 per cent of native grassland remains. The main reason for much of this habitat loss is the conversion of the land for annual agriculture.

Much of the remaining intact patches of native grassland are used for cattle grazing, with conversion of these grasslands to annual cropland often tied to decreases in cattle prices (i.e., sometimes it is more profitable to grow canola than cows). This highlights another important point: cattle ranching is essential to the conservation of native grasslands. So now that we have a bit of background on native grasslands, let’s get back to the birds. 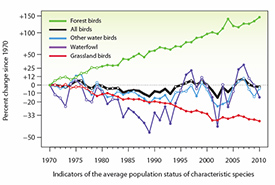 As you can imagine, the loss of significant amounts of habitat has an effect on the species that depend on that habitat. Indeed, grassland birds have experienced some of the steepest population declines. Since the 1970s, populations of grassland birds on the Canadian Prairies have declined by 30 to 88 per cent. Many of these species are grassland obligates, meaning that they require grassland habitat for their entire life cycle.

A recent study was conducted to test exactly that. Specifically, it sought to determine if the abundance and reproductive success of grassland songbirds differed between planted and native grassland, or with the amount of grassland in the surrounding landscape. The study was conducted in the Missouri Coteau in Saskatchewan and included these nine songbird species: 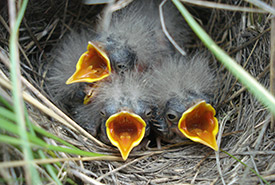 So what did the researchers find? Are planted grasslands equally good habitat as native grasslands for the four at-risk grassland songbird species? The short answer is no. Planted grassland is lower-quality habitat than native grassland for these four species. The results of the study suggest that planted grasslands are likely ecological sinks for the four species. An “ecological sink” is habitat that sees more birds coming into it than going out (i.e., birth and immigration rates are lower than death rates). As a result, these habitats do not contribute to population growth. 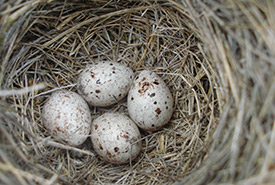 The main message to take away is that the conservation of native grassland is critical for stabilizing the population declines of these four at-risk grassland songbird species. These species either only occurred in native pasture, or they had higher reproductive success in native pasture than in planted grasslands that were used for pasture or hay.

I presented the results of this study as a webinar as part of Saskatchewan Prairie Conservation Action Plan’s “Prairies Got the Goods” Week 2019. You can check out the presentation here.