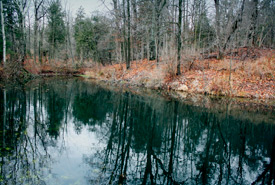 The exhibit was held at the Kortright Centre for Conservation in Vaughan, Ontario. The MacMillan Nature Preserve, which was showcased in the exhibit, is one of the many naturalized spaces that can be found in the area. The other naturalized spaces include Maple Nature Reserve, William Granger Greenway, Nashville Nature Reserve, Humber River Trail, Sugarbush Heritage Park, Bartley Smith Greenway Trail as well as many others. 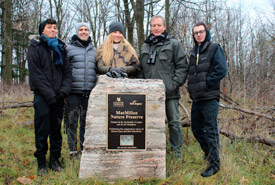 Students from the class with their teacher, Mr. Senisi, and NCC's Mark Stabb at MacMillan Nature Preserve. (Photo by Francesca Cornacchione)

We wanted the exhibit’s photographs and videos to bring awareness of the beauty and essence of the trails throughout Vaughan.

The name of our exhibit was partly inspired by Walt Whitman’s 1855 poem "Continuities," which highlights the connectedness of everything around us. We named our exhibit Natural Continuities to reflect how everything in nature is connected and how its power is eternal. 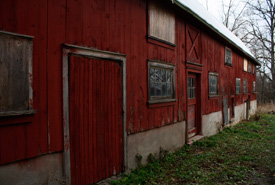 A barn on the MacMillan Nature Preserve. (Photo by Giulia Venir)

It is evident that nature will always be there for us, but only if we are willing to protect it. Through conservation efforts, its presence will remain a constant throughout our years, while everything around us will change. Conservationist Lyn MacMillan made it possible for this to happen by working to ensure naturalized areas like the Niagara Escarpment and the lands surrounding her estate are protected and conserved for the future by donating them to the Nature Conservancy of Canada (NCC).

Our exhibit’s goal was to bring awareness to Lyn’s work, and the areas that have been successfully conserved throughout Vaughan because of it. Lyn’s determination helped preserve the Niagara Escarpment and inspired the creation of the Ontario greenbelt. Her charitable donation of land on the southern tip of the Oak Ridges Moraine to NCC expanded the greenbelt into suburban Vaughan. 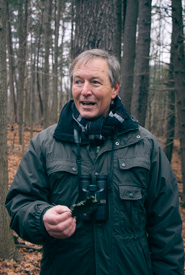 Mark Stabb talking to students about MacMillan Nature Preserve while they explore the property. (Photo by Alexandra Ouzounis)

Throughout the semester, we were able to visit various naturalized spaces around Vaughan. We were also able to meet with Mark Stabb, NCC's program director for central Ontario, for a tour of the MacMillan Nature Preserve. He spoke to us about Lyn’s conservation work, the history of the property as well as future plans for the land.

He enriched our knowledge of the plants and animals that could be found on the property. We were able to see an owl in flight as well as footprints of a coyote chasing a deer. Mark explained to us how to look for signs of this type of wildlife. 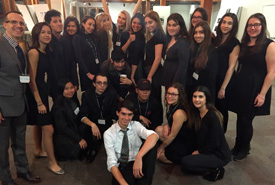 The class with Mr. Senisi at the exhibit. (Photo by Alexandra Ouzounis)

After our visit to the MacMillan property, we visited the Kortright Centre for Conservation. Here we were able to explore the natural area and trails where our exhibit would be held.

The day of the exhibit came too quickly. Our class, excited and nervous, worked tirelessly throughout the day to make sure the night was a success.

During the semester, our knowledge, appreciation and respect for naturalized spaces in Vaughan grew greatly. Our exhibit marked a significant milestone in our photography endeavours and personal lives. We grew as individuals and as a class, developed meaningful relationships, and we now have special memories to hold on to. 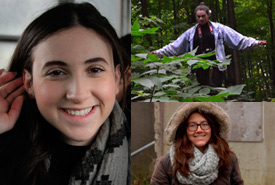