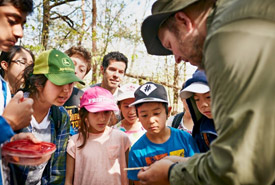 In recent years, a number of reports have suggested that screen time has taken a serious toll on children’s mental and physical well-being. But when kids ditch their screens to get their hands dirty in nature, amazing things can happen.

This May, students from Adrienne Clarkson Public School in Richmond Hill, Ontario joined the Nature Conservancy of Canada (NCC) for a day of learning and exploration. The students travelled to the forest at the Goldie Feldman Nature Reserve located in King Township. Here to participate in Nature Days, the students were in for a day of learning first-hand about forests, wetlands, streams and the species that live in them. NCC’s reserve was transformed into a living classroom for the day.

The Nature Days program was launched in 2012 by NCC and HSBC Bank Canada to engage youth in the natural environment.

Exiting the school bus and marched up the dirt path in two straight lines, the children’s excitement bubbled over. They came with hats, sun glasses, sun screen and cameras – ready for a new experience. One Grade 3 student exclaimed that she saw a beaver in the pond by the path that led to the nature reserve. It was her first time seeing a live beaver.

As the day unfolded, the children’s curiosity and sense of wonder continued to grow. They inspected bugs, trees, sticks, dirt, animal tracks and birds, all the while peppering NCC staff with a seemingly unending stream of questions. The students learned about the relationship between species and habitats (like dragonflies in open meadows) and discussed how to identify native trees and plants. They learned about the endangered Jefferson salamander and the habitat this species depends on. 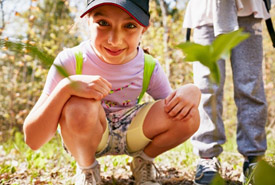 The natural world creates a unique sense of wonder for children that no other environment can provide. This is especially important during a time when nature deficit disorder is an increasing concern.

“The Nature Day event was the first time that some of my students explored the woods. It was a chance for them to learn about different trees, examine insects and investigate under logs and along stream beds in search of salamanders,” said Marc Lemoine, Grade 8 teacher at Adrienne Clarkson Public School. “Today, these are all novel experiences, but only 30 years ago, they were just a regular part of growing up in Canada. The day was a refreshing reminder of the need for children to connect with nature in a tangible way.”

The conservation of our natural places demands that we build and encourage stronger bonds between nature and Canada’s youth so that their future decisions may be influenced by a healthy respect for, and love of, nature and its inherent wonders. 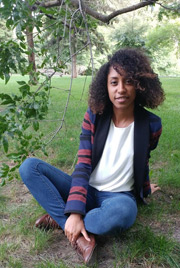 Micheline Khan was the conservation engagement coordinator for the Nature Conservancy of Canada.