Nice habitats, but not for humans 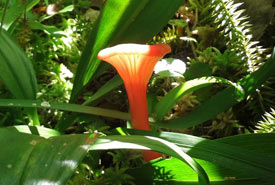 A brightly-coloured mushroom in an alder thicket in the Chignecto Isthmus, NB (Photo by Joanna Hudgins)

As a Nature Conservancy of Canada (NCC) intern, I spent many days this past summer strolling along beaches that rival the Caribbean for their beauty. Not all days could be like that, of course, so some days I hiked (or rather, scrambled) through terrain that makes most people wince when it’s described: the alder thicket.

Speckled alder thickets are special creations for interns who are insistent that yes, they want a job working outdoors. They are rewarded with the chance to crawl, scramble and fall through a soggy land where every step requires competing with the local vegetation to stay dry.

Why did I subject myself to this, you ask? As a summer intern, my job was to visit and monitor NCC’s properties. This included conducting breeding bird surveys, putting up signs and setting minnow traps for fish surveys. My fellow intern and I made notes of inappropriate uses of the land (like dumping), recorded all of the species we encountered (including tracks, songs and sightings) and connected with our local property stewards (local volunteers who care for NCC properties near to them).

Alders are a compromise between trees and shrubs. They grow as giant shrubs with limbs that extend diagonally, making them impossible to either dodge around or duck under. They love water and often grow along the edge of streams or in swamps. When alders die, they sometimes forget to fall over. This means that the nice sturdy limb that the unwary intern plans to lean on falls at the first touch of a hand, leaving her windmilling her arms and trying to stay on her tiny hummock of dry land. 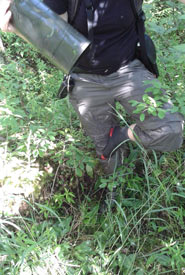 Draining my rubber boots in the Chignecto Isthmus, NB (Photo by Claire Elliott)

It is possible to step in the damp hollows between hummocks, of course, but about half the time you end up over your boots or thoroughly stuck in rich, black muck.

Because alders are somewhat shrub-like, they offer a form of rain that doesn’t come from the sky. They keep drops of water carefully balanced on their leaves until a human comes by. The human’s clothing instantly absorbs all of that alder’s water and probably that of its neighbours on either side. If the human’s rain pants aren't working well, they get to enjoy a delightful sloshing sensation in their rubber boots before long, which requires regular drainage.

Despite my half-joking complaining, thickets also provided a handful of wonderful moments this summer. In an alder thicket in the Chignecto Isthmus in New Brunswick in June, while surveying the area with my field mate Claire Elliott, a tiny yellowish bird shot out from underneath my boot just as my weight was coming down on it. When I froze and took a look around my boot, I found a branch that was held at an angle above the ground. Grass had grown and wrapped around it, and underneath it was a tiny nest with five brown-speckled blue eggs. 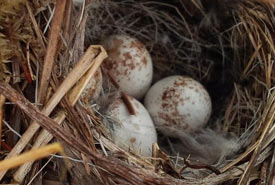 The common yellowthroat nest that I nearly stepped on in the Chignecto Isthmus, NB. (Photo by Claire Elliott)

It is considered very poor form to deliberately startle a parent off a nest for a picture, but since the opportunity had occurred by accident, we took the extra few seconds to snap a picture and then hurried on our way. Later I determined that it was likely a female common yellowthroat, because of the location and the glimpse I had of the mother. These birds are often found in wet tangles, and more than once this summer I was cheered in a dense patch to see a masked-faced male peering out at me from between branches and chipping at me.

Josh Noseworthy, a conservation biologist with NCC in the Atlantic Region, said it best about environments such as thickets: they’re excellent habitat, just not for humans. Their value lies not in what uses humans can make of them, but in the creatures that specifically need wet tangles to live in.

Alder flycatchers, garter snakes and northern leopard frogs all thrive in wet thickets. A grey catbird once almost convinced me to crawl into a very nasty-looking thicket to rescue the "kitten" I heard crying in there. Moose, despite their large size, somehow have no problems getting through a space that would make an intern cry, and they do it silently.

These animals require tracts of lands and habitats that seem miserable to us as humans, but to them, it’s where they live. Alder thickets have both shaded and open habitat and are fertile places to live, if you’re a yellow warbler. They’re full of insects for flycatchers to hawk, and since alders are capable of fixing nitrogen, they’re fertile places for plants, too.

Habitat full of alders should not be considered any less valuable to wildlife than forest or beach just because humans don’t enjoy spending time in it. That’s why NCC buys land with alder thickets, too. And it’s why next year’s interns will have the same memorable experience that I did, because as long as NCC owns alder thickets, they will monitor and care for them just as they do their beaches, salt marshes and forests. 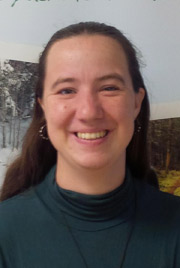