O’Canada! Culture of the wilderness: A day at the NCC Nebo property 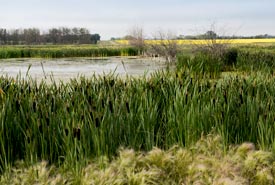 Nebo, some 70 kilometres due west of the city of Prince Albert, Saskatchewan is the largest and northernmost property recently acquired by the Nature Conservancy of Canada (NCC). This is an interesting acquisition, as it is located in the transition zone between arable farmland with sloughs and aspen groves in the south, while to the north there is the boreal forest with coniferous trees and flowing waters descending from the rocky Precambrian Shield. It is on this boreal plain that the soil changes from a loamy peat bog-type to becoming heavily infused with clay and silt. 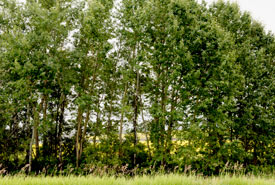 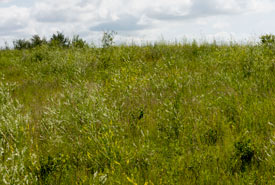 Meadows moving to the rhythm of the wind (Photo by Gail. F Chin) 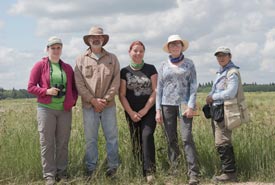 Every new acquisition of property by NCC begins with a survey of creatures and vegetation on the land, taking note of the topographical features and anything of particular interest. Volunteers were recruited to conduct a property survey under the supervision of NCC staff. Conservation Volunteers came from all parts of Saskatchewan, two from Saskatoon, another from the North Battleford and me from Regina. At this point the NCC property sign had not been put up at Nebo yet.

It is impossible to survey the entirety of 439 acres (180 hectares) in any kind of close detail with only six people, but it is a start. We were equipped with clipboards for writing our lists of things observed, and were offered binoculars and reference books. Sarah Ludlow, an NCC staffer and one of the team leaders, suggested that we could specialize our lists, such as birds or wildflowers, or grasses; whatever we felt comfortable with.

Nebo is leased as grazing land to local farmers and ranchers. These cattle provide an ecological “disturbance” to control vegetation and wildlife, to a degree. The land was difficult to walk on, as grazing cattle have left it uneven. For myself, a city person whose only country experience before arriving on the prairies was at the research farm at University of British Columbia in the third grade, and an occasional walk in Stanley Park, I was a bit lost standing on top of dry cow patties in this liminal biosphere.

About 15 years ago, I made a decision to learn about and adapt to this new part of Canada that gave me a viable career and home. It was then that I bought myself a small digital camera that I carried with me on walks. With that, it was the beginning of completely new way of understanding place — this place that is the prairies, and Saskatchewan. 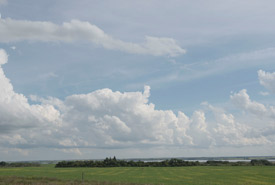 The flatlands of southern Saskatchewan are easy to drive through. Many people might say that there is nothing much to keep one’s interest here. There are no majestic mountains or mighty flowing rivers, only oceans of waving wheat and canola fields with lots of sloughs. Mountains and rivers are easily understood and appreciated, but to see the beauty that is the prairies requires more concentration. Looking through the camera lens requires one to stop and look out at the world. Selfies are not permitted!

Being a volunteer for NCC allows me to experience nature beyond the city park, as well as meeting others who are also interested in nature. Standing inside the fenced area of Nebo, I was overwhelmed by the varieties flying birds and insects, grasses and plants that grew taller than me at five foot one, then willow galls, so tiny! I can recognize a few common birds and wildflowers, but nothing like the other volunteers. One always starts at the bottom, then struggles towards some kind of understanding of something. 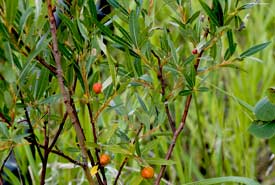 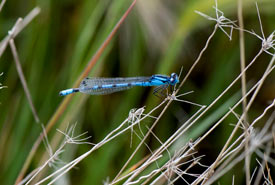 A delicate damselfly perched on the tip of a grass (Photo by Gail F. Chin) 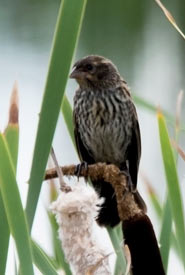 Flying around Nebo were damselflies and varieties of dragonflies, as well as white and brown butterflies, the usual mosquitoes, ticks, beetles and ants. Trying to photograph them, however, requires skills that I have yet to hone, and every photographer needs luck; lots of luck! But I did nail some nice shots of the turquoise damselflies and a female red-winged blackbird.

Due to the mild winter and early spring, wildflowers are blooming in profusion here. The land is green now; the brilliant green of new growth that seems unnatural, almost artificial, like a colour from an artist’s paint tube. Standing still, I could hear the din of the natural world — bird songs, the buzzing of insects and the splash of a mammal — none of which I could specifically identify. And Sarah told us to be careful of bears! Make noise, she said! 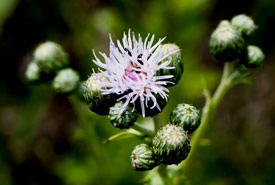 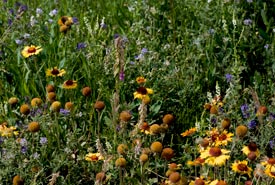 Standing there amidst the grasses and bugs, I thought to myself: “this is the wilderness!” This is not the pristine wilderness, but one marked by the encroachment of human settlement that introduced domesticated animals, farming, non-native vegetation, insects and other creatures, and fencing. What remains of the native wilderness is the concern of NCC staff, whose objective is to conserve it and allow it to regenerate.

The charting and conservation of territories, such as Nebo by the Nature Conservancy of Canada, serves more than scientific or ecological interests; it is about who we are as Canadians living on this land. That’s why we need to do our part to conserve our natural heritage!