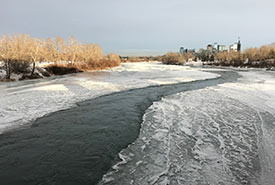 This is part two of a four-part series on bike commuting through nature. Read part one – fall here.

What kind of wingnut would bike commute in the dead of winter, you ask? Well, this one does, and I’ll tell you why. I find winter beautiful — the transformation of green to white and the change of view it provides. Unlike city streets, where the snow-strewn roads become wet piles of grey slushy mess or icy, rutty slalom courses, Calgary's multi-use Bow River pathway is plowed within 24 hours of a snowfall.

I love the quiet of my winter bike commute. I feel like I’m kilometres into the backcountry when in actuality, I’m only a hundred metres from a four-lane arterial roadway. The snow on the path’s adjacent fields and trees absorbs the sounds of the city rushing past, and the only thing I hear is the sound of my studded tires confidently gripping the path’s packed ice/snow.

A fresh blanket of snow lets me see what critters lurk within this urban nature. Tracks from the now-white jackrabbits create circuitous patterns in the snow. Magpies dart from tree to tree. A couple of winters ago, I glimpsed a coyote on an ice slab in the middle of the river. I haven’t seen one since, but I keep looking.

The boughs of the spruce trees lining the path bend under the weight of a heavy snowfall, providing a magical sight and reminding me of Whoville at Christmas. As the Bow River doesn’t always freeze up in its entirety in the winter, Canada geese and thousands of other waterfowl, including ducks, hang out on and near it.

Chunks of ice float along with the river’s current in early winter. The chunks increase in size and number as the weather gets colder, oftentimes creating an ice jam in areas where the river narrows. I like to watch the progress of these ice jams; I place bets with myself on how long it will take until the jam builds to overtake the bike path and I’m re-routed.

There’s a small section of pathway with very little light pollution, and it’s here that, on a frigid, clear-sky morning, I can look up and test my (apparent lack of) knowledge of the constellations. If there’s a full moon, I have been known to shut off my bike light and ride by the moon’s glow.

The eerily beautiful mist, or ice fog, that rises from the river on super cold mornings creates a stunning foreground to the city’s downtown highrises in the distance. And if you think I need my head examined for biking in winter, it’s hard to beat the flyfishers’ dedication to communing with nature as they stand knee deep in the ice-cold Bow River in January in search of brown trout.

The pathway is less busy this time of year too; winter-loving runners, walkers and cyclists nod to each other in silent solidarity for being out here at -20 C. Beyond the calorie burn, I’m ever hopeful that they also notice the urban nature as they while away the kilometres.