O'piping plover where art thou? 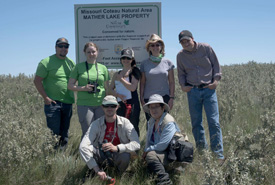 2016 marks the 5th international census of the piping plover population. Recently, I joined the Saskatchewan chapter of the Nature Conservancy of Canada in a two-day count at Mather Lake and Shoe Lake West in an area of central southern Saskatchewan referred to as the Missouri Couteau.

This area is marked with shallow saline lakes and rolling grassy hills. These shallow lakes, which easily dry out in the summer heat, provide perfect environments for piping plovers, which are endangered. The presence of these plovers is an indication of a healthy wetland environment. 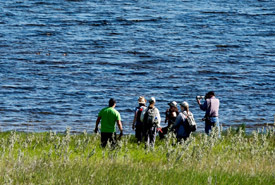 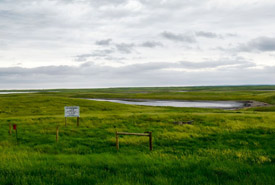 It was interesting to participate in the surveys on both days and observe how two lakes fairly close to one another geographically would be so different in terms of water levels and habitat. I attended the Mather Lake census for the entire day, but my poor navigation abilities made me late for the Shoe Lake event. Then the high winds caused me to depart earlier than the other volunteers.

At Mather Lake, no one found a piping plover because the water level was so high that small wading birds would have difficulty finding food and creating nests here. That result was no surprise to the scientists of NCC, who wanted to use this opportunity to survey the property and understand its natural habitat. 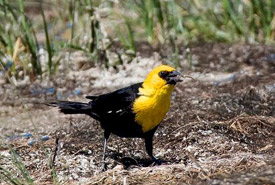 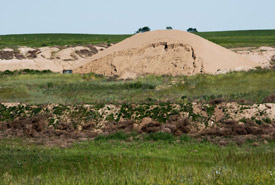 In the lake there were mallards, eared grebes and much to my delight, a yellow-headed blackbird, something I had never seen before.

Some of the vegetation present, such as prickly-pear cactus, is more reflective of desert regions. In fact, parts of Saskatchewan are sand dunes and badlands. Across the road from Mather Lake, one can see that the original landscape consisted of low buttes with scrubby vegetation.

Here the grasses do not grow as thick or as tall as at Shoe Lake, but are sparser with more bushes. Much to the pleasure of my camera there were prairie roses, graceful cinquefoil, large leaved avens and more, in full bloom. 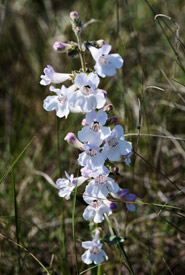 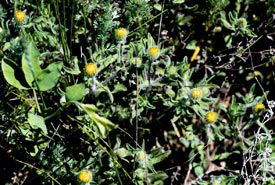 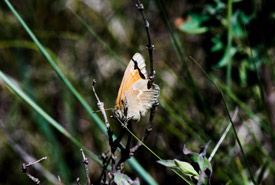 For large insects, I noticed large swarms of turquoise and black damselflies and the presence of cream and orange-coloured butterflies.

Next day, the census continued at Shoe Lake, which was almost dry, perfect for shorebirds. But in two hours I only sighted a lonely killdeer pecking at the mud. Raindrops and thunder, accompanied by very strong winds, made for poor birding weather. 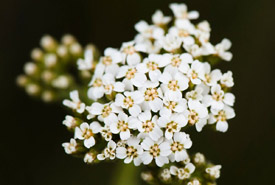 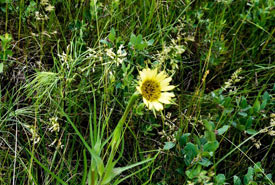 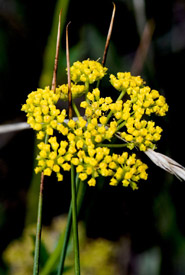 As I waded into the sea of waving grasses, moving towards the dry lakebed to join up with the rest of the group, I suddenly noticed an array of wildflowers burgeoning underneath, protected by varieties of tall grasses. These wildflowers are not large, gaudy blooms that one finds in the tropics or at a floral shop. These prairie wildflowers are tiny and do not beg the attention of humans. 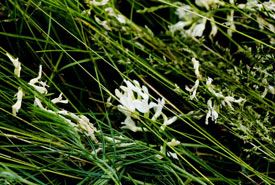 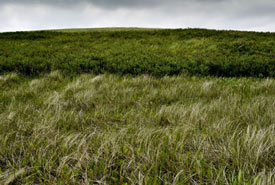 My camera focused upon cream-coloured vetchling that had been freshly stomped on. Here at Shoe Lake West, the vegetation was much thicker and the grasses greener and taller than at Mather Lake. No cacti spines here to stick into my knee! 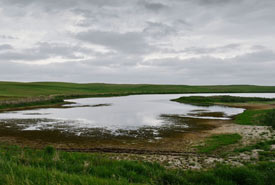 Red glasswort or samphire grows along the shoreline of the lake, adding a rosy glow to tones of grey and white cracked mud. I could not immediately see any damselflies here, or as many large flying insects as I did at Mather Lake. The winds were so strong that the tall grasses fluttered like streamers of varying shades of green, incredibly beautiful to witness and so characteristic of the prairies. 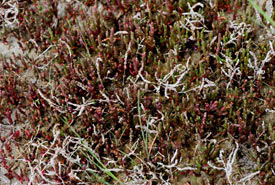 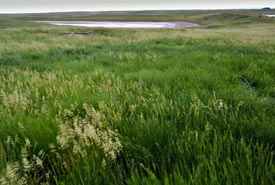 As for myself, I never did witness any piping plovers at either lake, although the group counted 21 at Shoe Lake West! That’s a healthy wetland environment for small wading birds!

I was deeply moved by the subtle beauty of both lakes and understood why it is so important to conserve as much of the original grasslands with its wetland habitats as possible for piping plovers and other species of birds. For the human population, it is about maintaining our water supply and protecting the health of our planet.

I thank the Nature Conservancy of Canada and its staff for educating me about the importance of these places.

So, piping plover, where art thou?

Want to share your CV experience on Land Lines? Find out how you can become a Roving Reporter today.