A chance encounter with Charles Darwin 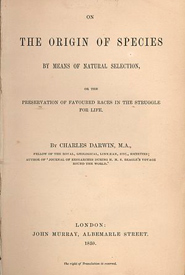 The title page of the original first edition of On the Origin of Species, 1859 (Photo from Wikimedia Commons)

The day after I finished my last undergrad exam was warm and sunny — perfect for celebratory drinks on an outdoor patio. Instead, I found myself entering the quiet, cool darkness of the Thomas Fisher Rare Book Library at the University of Toronto in search of a book I had placed on hold. I took the elevator down to the reading room and approached the desk, where a first edition of Charles Darwin’s On the Origin of Species was waiting for me.

First published in 1859, On the Origin of Species instigated a storm of controversy in the scientific community. Darwin proposed the idea that species evolved slowly over large periods of time, rather than existing in unchanging forms that were designed by a "creator." He called this process of change "evolution by natural selection." A radical concept for its time, it has significantly impacted how we study the life sciences today. This understanding of evolutionary processes was, and is, fundamental to advancing our understanding of life on Earth in all its diversity, from cellular biology to ecology.

The librarian at the loans desk brought out two copies of the book, one for me and one for a man who had coincidentally placed a hold on the same book at the same time. When I received my copy, it appeared fairly worn, as I expected a book of its age to be. I sat down at one of the large wooden desks in the library, flicked on a reading lamp and slowly began to leaf through the pages. 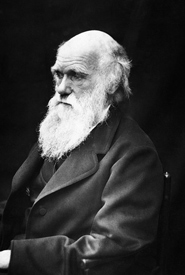 As I was reading, I overheard the man speaking with the librarian about how the book he had wasn’t actually the first edition. I checked mine and sure enough the year of publication was 1860 rather than 1859. By now, a second librarian had joined them and explained that the library usually didn’t allow the first edition to be viewed by the public in order to better preserve it.

The man insisted and I decided to politely intrude and told the librarians that I too was interested in seeing the first edition. They finally granted our request and fetched the original 1859 copy. The book came in a protective box and was in near-pristine condition. The two of us examined it together, carefully unfolding the spread with Darwin’s hand-drawn “tree branch” diagrams (modern editions don’t have this fold-out). Just touching this book felt almost sacred, and I was glad to be able to share the experience with someone who was awed as much as I was.

I’m certain that any student in life sciences can appreciate my excitement in physically holding a copy of the first edition of the Origin. At university, I majored in biodiversity and conservation biology. My interest in this field was spurred by reading about Charles Darwin when I was in the sixth grade. That year, I presented a project on the Galapagos Islands, the archipelago famed for inspiring Darwin’s ideas about natural selection while working as a naturalist aboard the H.M.S. Beagle. My understanding of evolution, adaptation and species diversity has come a long way since that presentation.

While I can admit only to having read excerpts from On the Origin of Species, I can attest to it being an elegant and timeless piece of scientific writing. Seeing a first edition copy certainly felt like a fitting end to my degree.

Emily Posteraro is an enthusiastic birder and a recent graduate from the Biodiversity & Conservation Biology program at the University of Toronto.