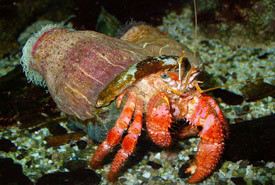 A sea anemone hitching a ride on a hermit crab. (Photo from Wikimedia Commons)

Friendships are one of the most organic things that can happen between humans. An often magical thing, these bonds are strong and can last a lifetime.

While these human connections are no doubt valuable, for animals, “friendships,” or mutualism, can be the difference between life and death.

July 30 is the International Day of Friendship. While I’ll be thanking my colleagues at the Nature Conservancy of Canada for their advice, mentorship and virtual coffee dates, I’m also celebrating by thinking about the intricate bonds between species in the wild.

More than an Uber

This particular friendship involves sea anemones hitching a ride on the backs of hermit crabs, making for easier travel across the ocean floor. The crab will also extend its tentacles for the sea anemone to munch on the crab’s leftovers. Sea anemones work for their supper, fending off predators, such as octopuses, with their barbed tentacles to protect the crab.

In order to clean themselves, larger fish, such as damselfish and sharks, rely on trusty relationships with smaller wrasses, catfish and gobies. When it’s time for a bath, these larger fish swim into neutral zones, known as cleaning stations, where smaller fish will consume parasites, mucus and dead tissues off of the individual. After the fish enters the zone, it will assume a non-threatening pose to signal to the smaller fish that it wants to be cleaned and that it won’t eat them. The larger fish leaves spic and span and the smaller fish leaves with a full belly and, ultimately, alive. 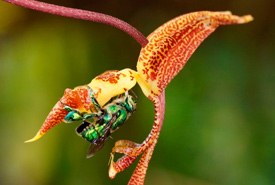 Male orchid bees help pollinate South and Central American neotropical orchids by collecting pollen from the flower and turning it into pheromones. This messy procedure allows for both parts of the flower to become fertilized, which is vital for orchid reproduction. While the exact benefit for the bee has yet to be confirmed, scientists believe the pheromones created may attract female bees or be used to mark territories.

Comparable to the relationship between humans and domesticated livestock, ants and aphids have built a bond sweeter than sugar. Aphids, small sap-sucking insects, provide ants with honeydew to eat from excess sugars. In exchange, ants protect aphids from predators and carry them to and from host plants.

Whether your friendships involve catching up over dinner or catching a ride on each other’s back, make sure to celebrate the unique friendships in your life.