I did not fall into a burning ring of fire 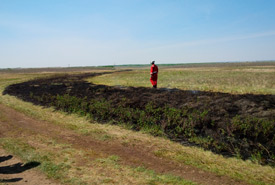 A black line is established before prescribed burn begins. (Photo by NCC)

I was several hours into my first major, fully equipped prescribed fire when I promised myself I wouldn’t cry.

I was tired, it was getting dark and, to be honest, I wasn’t really sure where I was; but the real reason I was trying not to cry was the unbelievable amount of smoke.

It was flames and smoke galore, tears and snot to match! My job that day was to the patrol the perimeter and put out any wayward flames with my trusty fire hose. To be fair, I was safely behind several metres of black line (already burned vegetation — prepared before the major burn started and used to control the spread of the intended fire) and wet line (a band of vegetation that has been wet with water and, in some cases, foam). Plus, I was surrounded by something like 50 trained firefighters (the forest and grassland kind). Maybe some willpower could have kept the tears from streaking the soot down my face, but chopping onions makes me weepy so, despite my promise, the waterworks flowed. Maybe not my proudest moment, but I’d have felt worse by staying in the truck. 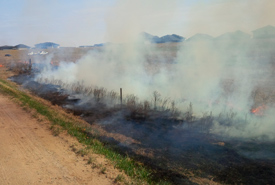 Since then, I’ve only been on smaller, less formally run burns. Under the direction of the Meewasin fire team and “burn boss” Renny Grilz, I’ve helped re-introduce the natural disturbance of fire back to a patch of prairie just north of Saskatoon. These were a bit more relaxed, with fewer gung-ho firefighters encouraging me when I couldn’t find the right hose coupling and no late-night patrols (previously all fires were out by five p.m.).

There are a bunch of reasons why people don’t want fire back on the landscape. A few are pretty obvious, such as avoiding loss of life, limb and livestock (not to mention buildings, barns and the backhouse).

The others may be less obvious. For one thing, a properly controlled prescribed fire is a difficult thing to pull off. It can bring attention to your land in a way that you may not be comfortable with. People are drawn to these things and maybe having a bunch of gawkers on your property isn’t your idea of a good time. Plus, prescribed fires are expensive: pumps, trucks and potentially burned fences — but they’re also expensive in terms of food if you have animals on your property. There is no such thing as a free lunch, and setting fire to the grass your cows eat is seen as burning money from your bank account.

Then why do we do it? Or at least, why are us prairie conservation folks so keen on lighting stuff up? Burning is important because the prairie always used to burn, which sounds like a non-answer, but hear me out. Over the last 10,000 years, the ecosystems of the prairies evolved with regular grazing and regular burning. The plants and animals we have today — and the ones we want for tomorrow, too — evolved to compete in a system that experienced regular disturbances, such as grazing, burning, drought and whatever other catastrophe you can imagine. Life on the prairies picked winners and losers by hammering everyone again and again to see what they could take. 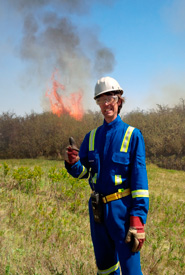 Hey aspen trees, you’re looking pretty good there creeping your way out of the safety of the coulee and onto the bald prairie…BAM! How do you like -40° C, 140-kilometre-per-hour wind and a herd of bison rubbing up against you?

What’s that, you say aspen? Fescue? You like stretching your roots onto the south side of this knoll from your moist, cool-ish north side home? Wham! Here’s a June fire followed by a July and August drought to knock you back to the north side.

Brutal and continuous, these repeated blows keep any one species from dominating, force others to adapt to the conditions and create a variety of biological niches we take for granted.

So, what’s the plan? Well, part of the job of protecting the different species on the land is managing their different required conditions. We do this when we ask ranchers to graze their livestock on our land at different times and at different rates. Following the leads of other Nature Conservancy of Canada (NCC) regions (here’s looking at you, Manitoba), Saskatchewan is starting to train its staff to plan, manage and conduct prescribed fire on our properties. We’ve had staff attend training workshops and real-life fires and set aside funds to purchase the necessary equipment to make these fires as safe and effective as possible.

Maybe the most exciting thing is that we have started researching the potential impacts of a prescribed fire at Old Man On his Back Ranch. There are many aspects of prescribed fire to study, such as how bison herds respond to burned patches on the land, and which plants and animals prefer conditions after a burn. Prescribed burns are not without risk, which is why, I think, it has taken us so long to get it started. We’re hoping that with adequate research and heavy monitoring we can answer these questions and more.