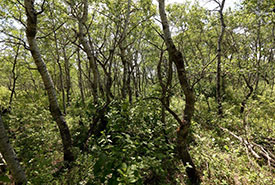 Forests are a vital part of our fight against climate change. (Photo by NCC)

When you think of Saskatchewan, your first thoughts probably go to flat cropland, rolling grasslands, sunsets and open horizons — and not forests. In reality, our prairie province is actually more than 50 per cent forested. In fact, boreal forest dominates the upper half of Saskatchewan.

These forests are important to consider. Not only do they create necessary biodiversity and habitat, but they are also a vital part of our fight against climate change. 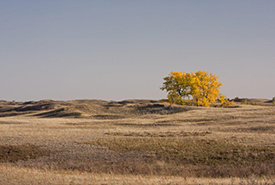 When you think of Saskatchewan, your first thoughts probably go to flat cropland, rolling grasslands, sunsets and open horizons — and not forests. (Photo by NCC)

When climate change assessments, like the International Panel on Climate Change (IPCC) report, come out and tell us that global human-caused emissions of carbon dioxide (CO2) would need to fall by roughly 45 per cent by 2030 (reaching “net zero” around 2050) to avoid long-lasting or irreversible changes, such as extreme weather and rising sea levels, it can make our situation feel hopeless. But it’s not. These are not doomsday documents. The rest of the IPCC report is dedicated to recommendations for how every country and sector can do their part to mitigate climate change and reach the recommended goals to save our planet and ourselves. One of those recommendations is reforestation.

While every natural habitat, including wetlands and prairies, are important for storing carbon and reducing the impacts of climate change, there is an increasing focus on forests. Last year, a group of 40 scientists from five countries who work with the Climate and Land Use Alliance released a document called “5 Reasons the Earth’s Climate Depends on Forests.” These scientists wrote that “reforestation and improving forest management, together, have large potential to remove CO2 from the atmosphere.” They went on to say that these “natural climate solutions” could provide 18 per cent of the carbon emission mitigation that the IPCC report stated as necessary before 2030 to keep global warming under 1.5°C. 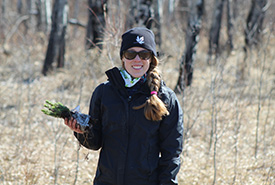 A quick refresher from your high school science class: trees convert the excess CO2 in our atmosphere into oxygen, ensuring that the atmosphere remains oxygen-rich while using the carbon to grow roots, stems and leaves. Franklin D. Roosevelt called forests “the lungs of our land.”

In other words, trees play an important role in fighting climate change, and anyone can join that fight as long as they have hands to plant trees. Part of our conservation work is forest restoration, and you can help.

Meeting Lake 03, one of the Nature Conservancy of Canada’s (NCC’s) properties in Saskatchewan, is located in a boreal transition ecoregion. However, when NCC acquired it in 2011, it was almost completely cleared of white spruce, a dominant species in boreal forests. 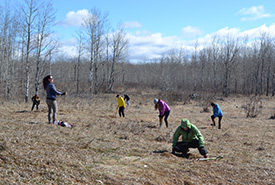 Every spring for the past three years, NCC Conservation Volunteers have come out to the property to help us bring back the diversity of this boreal forest. Since 2017, staff and volunteers have planted almost 1,000 white spruce, jack pine and other boreal trees and shrubs. Next year we will continue this annual effort, with more help from people like you. If we don’t have a volunteer opportunity near you, you can support reforestation and contribute to the fight against climate change by donating to NCC and organizations like Forest Recovery Canada.