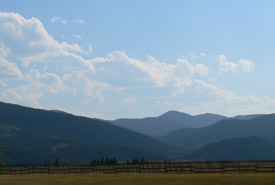 The Crowsnest Pass holds a special place in my heart. Whether I’m overnight backpacking with my children to enjoy the serenity of Window Mountain Lake, bird watching in the Alison Creek area, peacefully kayaking around Crowsnest Lake or fly fishing for trout in the Crowsnest River, I never tire of the beauty of the place. The pass is steeped in history and boasts some of the most spectacular scenery in Alberta with mountains that rise suddenly from the grassland, forming majestic peaks such as Turtle and Crowsnest mountains.

I was pleased and excited to discover a volunteer opportunity with the Nature Conservancy of Canada (NCC) in the Crowsnest Pass, called Riverbank Rescue. Living in Lethbridge, Alberta, a day trip to the pass can be easily managed with a good packed lunch and an early start. Having volunteered with NCC for a few years now, I was happy to take part in the Riverbank Rescue event.

I arrived at the meeting place a little ways south of Hwy #3 on what is called the Block Property, to find other eager volunteers already there. The rest arrived shortly thereafter — not a single volunteer was late. We convoyed down a seldom-used rough road for a ways and hiked to the river. In all, including NCC employees and interns, we were 18 strong. Not a bad turnout for a day that promised sweltering heat. The high turned out to be 31 degrees with a welcome breeze around 20 kilometres an hour.

Our goal was to remove old barbed wire fencing along the river that was causing many problems for wildlife. The area supports many large mammals, such as elk, deer, cougars, moose, black bears and grizzly bears, and the old wire fencing presents a great risk to them. Even birds can be impacted, get caught up and die in a tangled mess. As we learned that some of the wire is 60 years old, I was hoping everyone had a tetanus shot!

Our leader, Riley, is a young, energetic, intelligent biologist with an obvious love for the area and a strong desire to manage lands at risk. After introductions, Riley gave us the low down on what we had gotten ourselves into. We grabbed our gloves and eye protectors, donned our tool belts and split up into two groups, and headed into the bush — one group at each end of the section of fence, with the intention of meeting in the middle.

All the volunteers dove right in to the project and worked hard for the rest of the morning. The barbed wire was not easy to remove, but teamwork and grunt work got the job done. We worked well in two teams starting at either end of the fence in question and finished within four hours. Strangers before meeting that morning, we communicated well with one another and completed the task relatively unscathed.

We happily took a lunch break in the shade. I took this opportunity to speak with a few of the volunteers and get a sense of their motivations for working on such a project.

Something that intrigues me is the motivation of individuals to volunteer on a project such as this. Where do they come from and why do they travel so far to tear barbed wire out of the bush, coil it up and haul it out to a waiting truck? What is in it for them? While speaking to several of the volunteers, there were definitely several underlying threads, including the love of the outdoors, the love of nature, wildlife, spectacular scenery and the desire to meet others of like interests.

Some volunteers revealed that they are students of environmental science. Others are retired and now have more time to give back and some are dedicated employees. Everyone in attendance was happy to toil for a conservancy that they are proud to be part of that meets their needs and satisfies their desires to make a difference in our natural world. Everyone worked hard. No one was in it just for the ice cream. 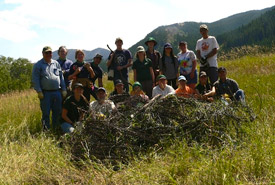 Our total haul from the day! (Photo by Angela Luck)

Toward the end of our work day, I thought I would travel along the river and meet up with the other group and see if I could get some photos. I stomped through the bush for quite a ways and wondered where the heck they all got to.

Finally, I came upon the group. They had just completed coiling their day’s wire. They met me with satisfied smiles, content with the work they had accomplished — and ready for ice cream. 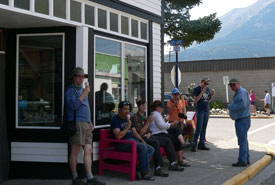 A cold treat to end the day (Photo by Angela Luck)

NCC treats their volunteers well. It’s nice to be working away in the woods and have someone bring you a granola bar. And even nicer to be taken out for ice cream after a hard day’s work. After hauling all the wire out, we were treated to ice cream at the Bellevue Ice Cream Shop — a perfect reward for a hard day’s work. I look forward to my next day of volunteering with NCC, somewhere not too far from home.

What volunteers had to say about the day

Lois has been an NCC volunteer for about five years. She loves the outdoors and feels it’s important to look after nature. Lois grew up on a farm and the outdoors is in her blood.

"Today is a good day. It reminds me of helping my dad do fencing on the farm. I’ve met a lot of interesting people today."

Graydon is an environmental science student at Lethbridge College. He enjoys the program and will be transferring to the University of Lethbridge in January. This is his third volunteer event with NCC this summer.

"I’m very impressed with how hard all the volunteers work on the various projects."

Harry — originally from New Brunswick and now lives in Calgary

Harry has been a NCC donor for a while. Now retired, he enjoys having more time to volunteer for things that are important to him.

"I always enjoy fishing this river."

"I was really looking for a placement for a work semester but was unable to secure one. Volunteering with NCC on projects such as this gives me the experience I’m looking for."

Isabella is studying environmental science. She feels that it’s important to volunteer today because NCC’s efforts help the lands that are at risk and help the wildlife thrive.

"Today is a good day of work because we are making the property leading up to the river much safer for wildlife and that’s important." 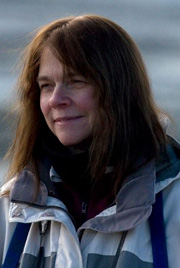 Angela Luck is a Conservation Volunteer with the Nature Conservancy of Canada.