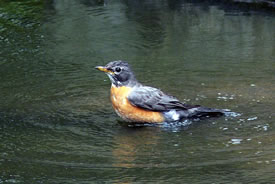 When I was a year old my parents moved to a quarter section of bush where they built a farm. I would guesstimate that 95 per cent of what our family ate was grown on that farm. To build the nutrients up in the field’s clay soil Dad planted clover and then in the fall tilled it under. The following year, Dad sowed wheat. Rabbits infested the family’s garden and flower beds, gnawing on the trees, shrubs and berry plants. Coyotes were plentiful that summer.

The following winter the coyotes were pretty mangy. Dad had no idea that the clover would result in a bumper crop of rabbits and coyotes and that when their plentiful food supply disappeared they would suffer. So you see, although Dad’s intentions were good they negatively impacted nature’s balance of life and the family’s food supply for a year.

For the past several years I have been experiencing for myself how we, humankind, are impacting our environment, our natural areas, our life-support system.

One winter I purchased a home here in Edmonton. That winter I happily sat in my recliner watching the song sparrows flit between the birdfeeder hung in the spruce tree and the cedar outside the picture window. That first spring as I raked up the leaves for the compost pile, I was shocked when I did not find any ladybugs. I recall my disappointment as I painstakingly dug up the dandelions. The soil was compacted and the earthworms, bees and butterflies I had hoped to find were nowhere on the property. I felt the weight of the task as I realized I had a multi-year project but I also understood that there would be satisfaction at the end.

The second spring, I found a few of our beneficial friends, the ladybugs. So happy was I that I carefully relocated them and their homes to what was soon to become the berry patch. As well, although I had spent the entire previous summer digging dandelions, they and all their offspring were back. I brought out the big gun: a pitchfork. As each hunk of cement-like sod was exposed I discovered that not only were the dandelion roots a foot long, there was barely a square inch of topsoil that didn’t accommodate a dandelion. I brought in a truckload of topsoil and mixed it in with the broken up soil, sowed grass seed and hoped. I also used the new topsoil to replace lawn with beds, planting native berries and shrubs.

It was during the following winter that I discovered three little song sparrows’ bodies, one sunny, -40 degree morning. One lay beneath the picture window, one beneath the birdfeeder and the third laid in the birdfeeder, his little beak still filled with seeds. Upset and concerned I wondered, “How can this be?”

The third spring, the ladybugs were plentiful. I was also happy to discover, that the prior’s years hard work was rewarded with fewer dandelions and that wherever I had dug previously, now resided our dear friend the earthworm. I redesigned the front yard, replacing sparse, dead grass with beds filled with wildflower seeds. As I worked in the yard I would often hear Mr. Robin singing his cheerio song as he perched on the tip of the spruce tree. I rediscovered my sense of peace and tranquility as I worked and listened to his song.

Then, one morning, after a harsh rain storm, I discovered a featherless baby bird lying beside my driver’s door. As I approached, his eye precariously fluttered open and then closed. I could see he was still breathing, although intermittent and shallow. I scanned the area. The closest tree was some 30 feet away. There was no sign of a nest or nesting material. Nor were there any signs of its parents. As I stooped down to pick the little guy up off of the cold, wet ground, his little body shuddered; his last breath.

The fourth spring was a happy continuation of the third; fewer dandelions, the bees and butterflies were back, Mr. Robin was singing, and the song sparrows awoke me each morning with their joyous song, "I’m alive, I survived." That year, with the assistance of the Nature Conservancy of Canada program, I discovered that the wildflower seeds I had planted the prior year were alien species so I dug them up and replaced alien with native wildflower seeds.

The fifth spring, I knew I would sell the place. I felt content with the health of the yard. It was in early June as I stood at the kitchen window that I first caught site of Mrs. Robin and her two fledglings. They were busy foraging in the berry patch. My heart leapt with joy for it was a like a verification of my belief that when we embrace the habitat where we live, we can make mutually beneficial changes. I soon discovered the robins’ nest secured in the fork of the 40-year-old poplar tree. Unfortunately, I later also discovered one of the fledglings lying on the sidewalk beneath the tree and then in late August, the robins’ second batch baby’s body beneath the kitchen window…both times after severe rainstorms.

I’ve come to understand that although food and shelter may be available, severe weather is yet another challenge; another stressor being faced by nature.