Something's Fishy: Cat's got my tongue 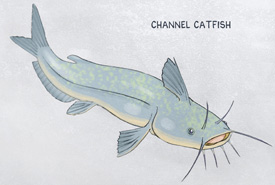 Before all you cat ladies and cat fanatics start reading this blog, I need to disclose something: I’m a dog person.

It’s not that I don’t like cats. Who couldn’t love their long whiskers and unpredictable behaviour? I just prefer the type of cats that swim in Canada’s waters over those that roam the land.

Ictalurid catfish — the most common type of freshwater catfish in Canada, which includes bullheads and madtoms species — are characterized by smooth, scaleless bodies with eight barbels resembling whiskers around their mouth. These barbels are highly sensory and, along with much of a catfish’s skin, covered with taste buds. Since these fish hunt mostly at night and in deep waters, they often rely on their barbels to find food, such as crustaceans and insects. 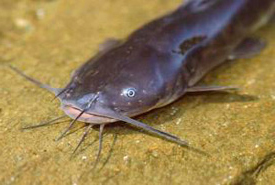 Brown bullhead (Photo from the U.S. Department of Agriculture)

In addition to whisker-like barbels, catfish are equipped with another cat-like trait that is known to leave a scratch or two: most catfish species have sharp spines on their dorsal (top) and pectoral (side) fins to protect them from predators. The pectoral spines in particular are fortified with venomous glands capable of doing fatal damage to fish. They can cause painful wounds to humans if the catfish is not handled properly. Luckily, the first time I saw a brown bullhead up close I was with an experienced aquatic biologist who warned me of this “cat’s” hidden claws.

Venom aside, much like cats on land, catfish can have a sweet side too. Ictaluridaes are known to be parental fish, building nests under rocks and logs and protecting the hatchlings for as long as two weeks after they’re born. 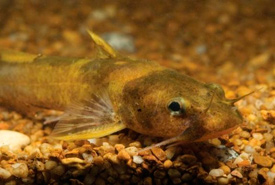 Northern madtom (Photo from the University of Michigan)

Catfish nest and live in large creeks and rivers with sand, gravel or muddy bottoms. Although they prefer clear waters with quick currents, this species can tolerate more turbid water, making it able to adapt to changing habitats.

While most species of catfish are common throughout Canada, the northern madtom is listed as endangered by the Committee on the Status of Endangered Wildlife in Canada and the Species at Risk Act. This species is restricted to southwestern Ontario and is threatened by pollution and soil runoff from urban and agricultural areas. To combat depleting populations, a recovery strategy has been developed for this species.

Regardless of whether you’re a dog or a cat person, we should all dive deep into Canada’s fresh water to appreciate this whiskered fish. But be careful: although catfish might look harmless, this kitty can scratch.