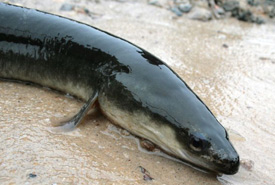 The electrofishing boat gently rocked against the current of the water below. It was a scorching summer day in late August on a tributary in Lake Ontario, and no amount of SPF could have saved my freckled shoulders from the sun’s wrath.

Earlier that day, as we were packing up the truck to head to the site where we were running a population survey, my supervisor at the Central Lake Ontario Conservation Authority (CLOCA) talked about the different types of fish we might come across throughout the day. His list included the predicable minnow species and darters, maybe a trout or two and, if we were lucky, an American eel.

“But don’t count on it,” he quickly followed. “They’re pretty uncommon in this area and especially at the site we’re sampling today.”

So when my eye caught a long, thin shadow skimming the water’s surface, my first thought was that I must be experiencing a mirage. It wasn’t until I blinked hard, verifying that what I was seeing was real, that I quickly stuck the net out and nearly missed the fish (which looked like a snake) in the water below. 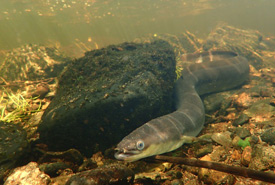 American eel is a slender species with a single fin extending from its back, and around its tail to its belly. Adult females may reach over a metre in length, while males are less than 40 centimetres long. The species' Canadian distribution includes the Atlantic Ocean and all its fresh water systems, from Lake Ontario to the mid-Labrador coast. American eel are a catadromous species — they begin and end their lifecycle in salt water, while living in freshwater in between.

American eels spawn in the Sargasso Sea near Bermuda. The American eel I saw that day in August had migrated more than 2,500 kilometres to Lake Ontario, and would one day again be making that journey back to salt water to breed.

While some populations of American eel are declining in Canadian waters, others are stable. The species is federally listed as threatened, according to the Committee on the Status of Endangered Wildlife in Canada (COSEWIC). In Ontario specifically, American eel are considered an endangered species, according to the province’s Species at Risk List. Populations of this species are subjected to threats, such as dams and barriers that block migration routes, overfishing and changes to ocean currents and temperature from climate change. 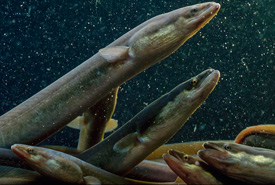 Every time you get to see an endangered species, on land or in water, it’s an unforgettable moment. As I quickly and carefully transferred the flailing fish in my net to the giant tub of water on the boat, I hoped that it wouldn’t reveal itself to be a water snake or, worse, an invasive sea lamprey. I wasn’t disappointed.

A couple of minutes filled with adrenaline and flipping through the field guide passed, and we confirmed we had something special on our boat. After I released the eel back into the water, the sun became a little more forgiving and the waters calmed. It was as if the universe was changed by the moment too.