Fine, I’ll say it: as a redhead, I have an affinity for red-coloured species. It’s an unspoken alliance we gingers have — walking, swimming or climbing through a world where we might stand out from the crowd based on our pigmentation.

Copper redhorse and I go way back. And even though they are kind of scary looking, I do enjoy the bright gashes that adorn the sides of westslope cutthroat trout. In a sea full of greens and blues, red in nature really makes its mark.

Unfortunately, my fellow red-coloured species are in trouble. Like copper redhorse and westslope cutthroat trout, redside dace has experienced a significant decline in its population. 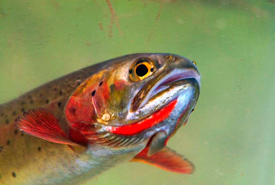 Redside dace is a small freshwater fish that is a member of the minnow family. Adults can reach up to 12 centimetres long and each has a bright red stripe from its gill to the end of its pelvic (bottom) fin. While spawning (May to June), the red colour will intensify in both female and male fish; even more so in males.

This fish is primarily found in streams that flow into western Lake Ontario, with scattered occurrences in tributaries of Lake Huron and river systems that flow into Lake Simcoe and Lake Erie. Like other redheads, they prefer to keep out of the sun, and they hide out in water shaded by overhanging streambanks and trees. They are mostly found in natural pools and slow-moving streams. But, like other members of the minnow family, they move to more shallow areas to spawn. 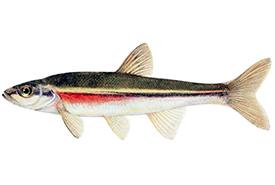 The insects are attracted to the streamside vegetation that is critically important to the survival of this species, not just for food, but for the right habitat conditions. Shade is needed to maintain the water temperature and protect the streambanks from erosion. Another red species, the red-osier dogwood, is one of many native shade-providing plants that grow near the water’s edge.

Due to habitat loss and degradation from development, the watersheds these species live in are being altered. While the redside dace can be found over a large area in southern Ontario, 80 per cent of its Canadian population lives in waters around the Greater Toronto Area. In addition to being assessed as endangered in Canada, redside dace is at risk throughout its range in the U.S.

Further changes in redside dace populations and habitat are being monitored by conservationists. At the Nature Conservancy of Canada (NCC), we are doing our part to help the species by protecting watersheds where this fish occurs, such as the MacMillan Nature Reserve.

According to Mark Stabb, NCC's program director for Central Ontario – East, “the reserve itself is considered to be contributing habitat that produces clear, cool water for redside dace populations. To enhance conditions further, NCC is working with the Toronto and Region Conservation Authority and the City of Vaughan to restore stream habitat in the reserve.”

Habitat protection is key to ensuring the survival of species like redside dace. And whether a species is brown, black or red, they all share the land and water with us and deserve a place in nature to call their own.