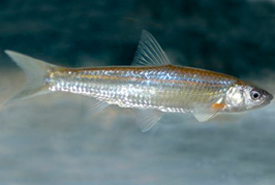 In my day-to-day life working in Canada’s largest city, I often find myself rushing from one thing to the next. People are always advising me to stop to smell the roses. I don’t like the smell of roses, so this unwavering, kind-hearted advice rarely resonates with me.

That was, until I opened up my field guide while researching this month’s Something’s Fishy post, about the western silvery minnow.

In Canada, the western silvery minnow’s range is restricted to the Milk River in southern Alberta. Unlike many other members of the minnow (Cyprinidae) family, this species is known to reside in slow-moving, silt-laden rivers that experience natural fluctuations in flow. Western silvery minnows are also known to stick together, forming schools of more than 100 fish.

Spawning occurs in May in shallow waters with, preferably, sandy bottoms. Females mature faster than males, and are able to spawn at one year old, while males spawn in their second year of life. Within a week of spawning, eggs hatch. 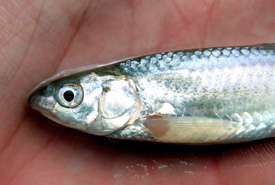 As its name suggests, this species is identified by its silver sides and faint stripe across the top of its body. Scientists once believed that this species, along with the eastern silvery minnow, was a subspecies of the central silvery minnow. They are both now considered distinct species based on each fish's differences in form and structure.

In part due to its limited distribution, the western silvery minnow has been designated endangered by the Committee on the Status of Wildlife in Canada. Other factors affecting this small, but mighty, fish are drought and pollutants in the water. The Milk River is characterized by drought conditions of increasing frequency and severity. According to a recovery plan devised by the Government of Canada and finalized in June 2017, while the future of flow regimes associated with the St. Mary’s diversion canal and proposed water storage projects are uncertain, consequences of these activities have the potential to significantly affect the survival of the species in the Milk River.

The Nature Conservancy of Canada helps protect populations of western silvery minnow on the Sandstone Ranch property. In addition to this fish, the 4,200-arce (1,700-hectare) area provides habitat for other species at risk, including western blue flag iris and Sprague’s pipit.

As a city dweller and runner, it’s hard for me to slow down. Overrated flora aside, I have decided to take a page out of the western silvery minnow’s playbook. By stopping to smell the flowers (just not roses), I’ve learned that the journey there is what can truly craft a person. The silvery western minnow is taking things slow, and now so am I.

Posted in: Species at Risk, Fish