Sidney's paradise on the edge of the Moose Woods 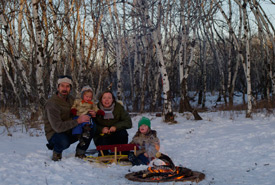 To tell our story, you have to go back to November 1999 when I met Scott Lawrence, my life partner, on an idyllic beach on the Baja Peninsula, Mexico. I was hitchhiking with a girlfriend, bound for Costa Rica. Scott had motorcycled from Canada and was about to head back there.

Scott and I shared many conversations; a particularly memorable one was about our hopes and dreams for the future. I explained to him that I was a photographer and that I was about to do my bachelor’s degree in photography. His response was that he wanted to buy some land in a place called Saskatchewan, build an eco-house and live self-sufficiently. I was intrigued by his plan, but we went our separate ways and continued our journeys. We stayed in touch by phone and email, and, over time, fell in love. I visited Scott in Canada the following year, then he came to live with me while I completed my degree in the UK.

I emigrated to Canada from the UK in 2005, excited to get started on our plan to buy land and live self-sufficiently in Saskatchewan. We worked and saved to buy some land, looking around for the right location. Initially we looked up on the edge of the boreal forest near Prince Albert National Park and around the Thickwood Hills. But with the long winters in Saskatchewan, I feared isolation. That’s why, when Scott found the tiny advertisement in The Western Producer, we were immediately excited about this piece of land for sale near Dundurn on the edge of the Moose Woods. We arranged to see it that same day and met with Sid Pryor, the landowner, for a personal tour of the property.

Sid was an elderly gentleman and explained that the land had been passed down to him by his father after the war. He let the Hutterites graze their cattle out there, but the soil had never been turned. At 160 acres (64 hectares), 40 per cent poplar forest, undulating, mixed terrain, ancient grassy sand dunes and open meadowlands, it was exactly what we had been looking for ― every bit the hidden gem we had hoped it would be.

We shook hands with Sid on agreement to purchase the land and though others approached him after us, he honoured that handshake as a done deal. We had just previously discovered I was pregnant and as we camped under the stars on our piece of paradise, we decided to name our baby Sidney if it was a boy. 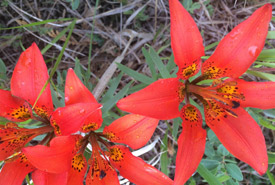 Prairie lilies on the road approach (Photo by Lucy Weston)

Sidney was born, and over time, his siblings Caleb and Madeline joined the family. Together we explored and experienced this patch of wilderness, encountering moose, deer, coyote, porcupine, prairie lilies and cactus, to name but a few of the species in this enchanting landscape.

The local rural municipality stipulated that the road approaching the property had to be widened to 18 metres and resurfaced to suit all weather. The neighbouring landowners and military base would have to be notified and the road alterations would have to be surveyed and agreed upon before work could begin. We found ourselves stuck in a bureaucratic quagmire with all further plans ground to a halt. 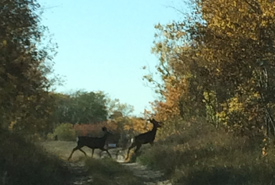 We went to rural municipality meetings, put out petitions and spent years pushing for support from them. We finally realized that by making these alterations the road approach would be destroyed and we would be bankrupt. Reluctantly, we admitted defeat ― the dream we shared on the beach could no longer be realized. I remember sitting in the kitchen having just turned 40, head in hands, in total despair. What would we do now? What would we do with this precious land? What has this all been for?

Never one to mope for long, I quickly decided to get proactive. I started asking myself what our priorities were. Firstly, we needed to get the land protected. This land must not be altered, exploited, damaged or harmed in any way. Secondly, we needed people to see this magical place. The land needed to be enjoyed and looked after for future generations. All I needed to do was find an organization that could work with us to make this happen, and with a little research I found the Nature Conservancy of Canada (NCC). Finally, we were able to create a happy ending for our story.

After a few phone calls, NCC sent their conservation science and planning manager, Matthew Braun, to see first-hand the land in all its splendour. We met out there, and, as if on cue, a mother and baby moose trotted out in front of us as we followed the old wheel tracks around the treeline.

It was clear to us from the beginning that NCC would be happy to collaborate with us. Initially, we discussed a partial lease agreement, but once again the regional municipality stipulated that the road would require the major alterations previously requested. Therefore, an all-or-nothing arrangement had to be agreed upon: we had to sell all the land to NCC to protect it. 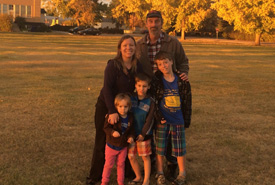 My family and I (Photo courtesy of Lucy Weston)

We now live in Dundurn Town, with chickens, a small orchard and a phenomenal garden. Our plan for self-sufficiency continues, and the now protected land has become something bigger and better than we could have imagined. We are proud to have been a part of the mission to protect this land with NCC for future generations. We will continue to be inspired by this wild paradise, and we feel profoundly gratified by sharing and conserving it for everyone to enjoy.

To read more from this author, visit her blog: lula09.wordpress.com. 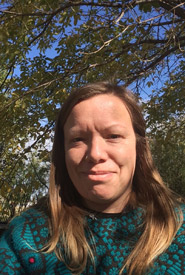 Lucy Weston is a freelance writer and photographer from the UK, now living in Dundurn, Saskatchewan.