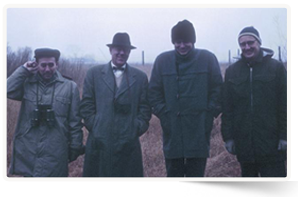 The Nature Conservancy of Canada (NCC) got its start in the early 1960s with four naturalists who were inspired to protect the natural world around them.

Based in Ontario, this plucky band of naturalists launched a program to take direct, private action to protect natural spaces and promote conservation. At the time it was an audacious plan. It was also the birth of NCC.

NCC's first project was Cavan Swamp and Bog in Ontario — an exceptional complex of bogs and other wetlands covering about 1,340 hectares (3,400 acres). The site is now the Cavan Swamp Wildlife Area, and it shelters an abundance of wildlife, including a wide diversity of fish species. 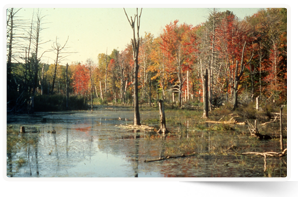 Cavan Swamp, ON (Photo by NCC)

NCC’s on-the-ground work is led by a team of conservation professionals who work to identify, plan and execute the protection of the best of Canada's natural spaces and manage and restore them for the long term.

And they’re not judging a landscape only by its covers.

It’s easy to forget what we can’t see or hear when we look at a landscape. Most of NCC’s properties across Canada are decorated with native plant species, set against a backdrop of magnificent forests, with a birdsong soundtrack filling the air. Mammals roam these lands and become a face for conservation and habitat protection.

During the past 57 years, NCC has helped conserve 14 million hectares (35 million acres) of ecologically significant habitat for a wide variety of species, including those under the water, swimming below the average person’s radar.

Here at NCC, we take the protection of all species seriously — including fish. Our conservation efforts have gone on to protect waters that are vital for fish populations across the country.

In Quebec, NCC has helped secure the islands and riverbanks of the Refuge faunique Pierre-Étienne-Fortin Wildlife Preserve and protected 15 kilometres of riverbed in the Richelieu River, both of which represents 12 per cent of copper redhorse’s range. Copper redhorse is a globally endangered species and can be found in only one place in the world: swimming in the waterways of southwest Quebec.

There are many fish species in Canada that are declining due to factors such as habitat loss and deteriorating water quality.

In the case of western silvery minnow, NCC is protecting the only place in Canada it is known to exist: the Milk River in southern Alberta. NCC helps protect populations of western silvery minnow on our Sandstone Ranch property. The 1,700-hectare (4,200-acre) area also provides habitat for other species at risk, including western blue flag iris and Sprague’s pipit.

Across Canada, NCC is working to protect the lands and waters where species live. While we have 57 years of conservation success stories under our belt, we know there is much more to do to ensure species like fish can thrive. There are many ways you can help to do your part to ensure a brighter future for our planet. One way is to help NCC protect as much land and waters as possible. Celebrate our 57th birthday by helping us conserve natural areas for the betterment of fish, other species and Canadians through the Landmark Campaign.