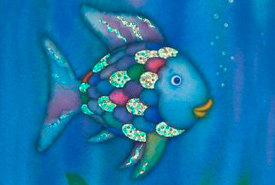 It’s no surprise that my favourite childhood book to cuddle up with my mom to read before bed was The Rainbow Fish, by Swiss author and illustrator Marcus Pfister. After my mom tucked me in, I would close my eyes and dream of swimming alongside the book’s protagonist, donning matching rainbow scales that would bond us for life.

The quest to swim with the beloved rainbow fish continued into my adulthood, as I thumbed through worn and weathered field guides in search of a species with magical scales. It wasn’t until I was knee deep in a rushing stream on the outskirts of Oshawa, Ontario, that I became acquainted with a fish resembling my rainbow friend from the past. Despite the hot summer sun, I could feel the freezing water flowing against the thick rubber of my hip waders.

After a day of collecting specimens for population surveys, the aquatic team at the Central Lake Ontario Conservation Authority (CLOCA) and I had been through several collections comprised mostly of blacknose shiners; a species with rather dun colouring. So our new, brightly scaled guest was a happy sight — especially to me. 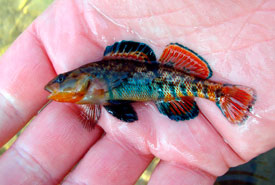 It was a rainbow darter. Lucky for me and the CLOCA gang, it was easy to spot, despite its small size, thanks to its vibrant colours.

Rainbow darters typically range from five to eight inches long — about the size of a pink school eraser. The vibrant colours that they are named for are only donned by males, and they become more brilliant during breeding season. The breeding male we came across that June had alternating dark blue and orange vertical stripes along its sides. Females typically have brown stripes against an olive green background along each side of their body.

In addition to being more colourful, male rainbow darters are slightly larger than their female counterparts. Size and colour play a large role during mating season and can determine the success of that individual’s ability to spawn. From March to June, groups of spawning males follow female rainbow darters until she picks the most suitable mate — usually the largest and most vibrant.

I couldn’t help but relate to this selection process when I thought back to my childhood quest. Like the spawning female darter, I too was searching for a rainbow fish.

That day in the stream, with the fish of my dreams in sight, I smiled the same as I had done 18 years previous when my mom first read me the book about the fish with the colourful scales. Staring back at me as I released him back into the stream was a fish who’s tale will be forever part of my story.