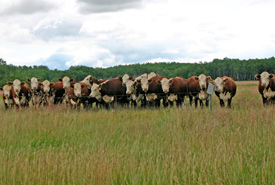 I usually do field work by myself, but sometimes I get the feeling that I’m being watched.

My main observers this year are the cows. The Yellow Quill Prairie Preserve, protected by the Nature Conservancy of Canada (NCC), is sustainably grazed by a herd of cows. Aside from the cows using some of my plot stakes as scratching posts and knocking them down, we generally leave one another alone. Sometimes, though, they get a little curious. They stare at me with slightly vacant eyes, as if they’re expecting me to do something spectacular, and that’s when I start to feel a bit self-conscious. Sometimes I moo at them just to see what they’ll do, which is usually nothing, but sometimes they moo back and then I wonder exactly what it was that I said. Where’s Doctor Dolittle when you need him?

I’ve also been looked over quite thoroughly by a resident upland sandpiper. Usually it just chatters at me, but recently it flew overhead a couple of times, landed in the grass nearby and started walking in a circle around my plot. It kept peeking out from behind the grass, as though I was up to no good. I would have loved to get a good picture of it, but it was just too sneaky — flying away before I had the chance. 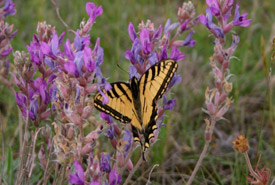 Mammals and birds aren’t the only wary creatures at the preserve. A beautiful tiger swallowtail was there recently, feeding on purple locoweed. Like most butterflies, it didn’t stay long enough for me to take its picture. Nor did a neighbouring hummingbird clearwing moth. Like hummingbirds, those insects are so fast that they are almost impossible to photograph.

In general, insects, such as butterflies and moths, have no form of self-defence and are less apt to let you get anywhere near them. The jitteriness of butterflies has likely resulted in a flaw in my field data. I don’t know a lot about what they are feeding on, or how frequently they do so, due to their reluctance in approaching me. I try to stay as still as possible, but I suspect my butterfly and moth observations are low for this reason. Maybe I should start wearing camouflage. 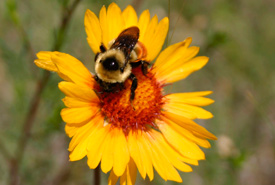 The presence of all these wary animals is why my favorite animals on the prairies are the bumblebees. Bumblebees are so confident that you are not going to hurt them (due to their stingers) that they’ll let you and your camera get pretty close to them. As a result, I have a plethora of bumblebee images and some really great visitation data. Yay, bumblebees.

I suppose what's been going on this summer is just tit for tat; I might be watching the wildlife, but the wildlife is also watching me!