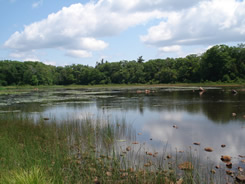 If one slogan can help us appreciate wetlands more, for me it would be: “wetlands are not wastelands.” In fact, the term “wetlands” represents a wide variety of habitats (such as bogs, marshes and swamps) that offer a rich array of ecological services.

These wondrous habitats also make many recreational activities possible! I owe my first guided nature reserve walk to a wetland: the Mai Po Marshes in Hong Kong. At the tender age of six I came to learn about wetlands as a haven for fish, frogs and waterfowl. That’s also when I realized sharing your love of nature can become a career.

The theme for this year’s World Wetlands Day is “sustainable livelihoods,” and rightly so! Humans and many other species depend on healthy, functioning wetlands to provide clean water, food and even a place to live.

With World Wetlands Day just around the corner, let’s see if you can identify the species by only seeing a partial image, below. 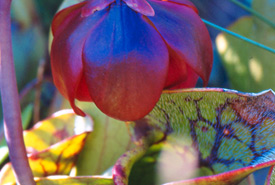 Hint: A provincial floral emblem with a carnivorous reputation, this species lures prey with its attractive colouration and fragrant perfume. 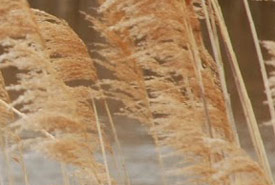 Hint: Originally from Europe and Asia, this species has taken root in some of Canada’s wetland habitats and is commonly seen in roadside ditches. Once introduced, the plant’s roots spreads through a vigorous network of rhizomes and form a dense, impenetrable thicket. 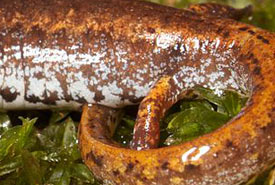 Hint: This species has no lungs, yet it can breathe through its skin and the roof of its mouth. Often confused with other species of its kind, this one has two unique and distinctive features: a constriction at the junction between body and tail, and the four digits on its hind feet. 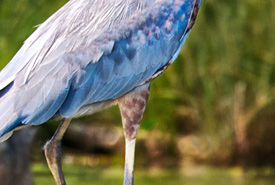 Hint: Patience, stillness and a swift strike are some strategies used by this species to catch a bite. With a pair of built-in stilts, this species is able to wade through shallow waters to forage for food while still being adept at hunting on land. It can be seen poised over riverbends or flying with its neck tucked in, with its long legs trailing behind. 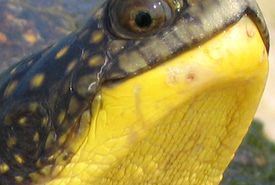 Hint: This species has an upward-curving jaw that gives it a perpetual smiling face. While this species lives in shallow waters and wetlands, it’s not unusual for it to travel several hundred metres from its aquatic environment in search for a mate or to reach a nesting site.

Did you guess them all? Click on the links below to reveal the answers.