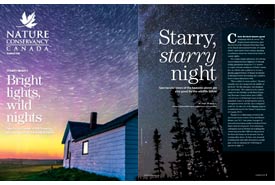 When I received the Summer 2016 issue of the Nature Conservancy of Canada (NCC) magazine the cover photo had me wishing I was somewhere else, specifically the Old Man on His Back Prairie Heritage and Conservation Area, a flagship NCC property in southwest Saskatchewan and now also a Nocturnal Preserve. The photo is a spectacular long exposure image showing the movement of the stars above the OMB. I’ve participated in two Conservation Volunteers events at OMB, and I’m looking forward to more. It is one of my favourite places.

Turning to the inside front cover, there is another breathtaking image, this time an awe-inspiring aerial shot of the shoreline of Gaff Point, Nova Scotia. So, two striking images, leading to informative articles about two NCC properties about as different in their ecology as you could imagine. As a bonus, the story about Gaff Point also includes an inspiring profile of a successful businessman (and nature lover) who has supported several NCC initiatives in his native Nova Scotia.

Now about those bats, specifically Townsend’s big-eared bats. Again, the article includes two stunning close-up photos of bats certain to cause anyone afflicted with chiroptophobia (fear of bats) to shudder and squirm. The article chronicles how phobia-free Conservation Volunteers and NCC staff are learning more about the population of this endangered species – and threats to their health – in various NCC properties in British Columbia.

Another article celebrates the centennial of the Convention for the Protection of Migratory Birds in the U.S. and Canada, a cornerstone of bird conservation in North America. I am fortunate to live in Saskatchewan, where the evidence of the benefits of this landmark agreement are all around me. Within a two-hour drive of Regina I can view waterfowl and shorebirds at bird sanctuaries located on migratory flyways, or on lakes and sloughs large and small. It’s no wonder Saskatchewan is informally known as “the duck factory” of North America.

Other articles include a profile of a nature preserve in Quebec, a celebration of the life of a conservation champion, updates on three NCC projects and the family vacation essentials of Canada’s Minister of the Environment and Climate Change. It’s encouraging to discover that when Minister McKenna has some extended family time, it includes exposing her three children to a variety of experiences in nature.

As a final note, this issue of the magazine includes a “Your Voices” back cover, which features three people sharing photos and short notes about memorable experiences they’ve had that have a NCC connection. Again, the back page is another reminder of the diverse properties that NCC manages, and the many, many ways we benefit from our interactions with the natural world.

The fall issue of the NCC Magazine will be available in October. Donors who contribute $25 or more will automatically start receiving the publication for one year. Find out more >