Stories from stewards of the land: The Cuzen property (Part Two) 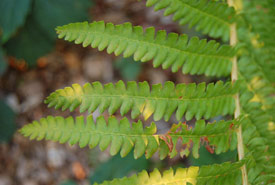 Closeup photograph of the pinnae of a sterile frond of the cinnamon fern (Photo by Derek Ramsey, Wikimedia Commons)

In Part One I described how I got intertwined with the Nature Conservancy of Canada's (NCC's) work and my experience at the Cuzen property (the sole property within the Galbraith stewardship project at present).

A special part of the Cuzen property is what is locally called the Cinnamon Bog. Of the many people who made an effort in protecting this area, Nels Maher, played a major role in the naming and conservation of the bog, according to Mac Kirk, CEO of the local conservation authority at the time. It is called this because of quite a large collection of cinnamon fern that resides there. Cinnamon fern thrives in more acidic soil, while this part of the country tends to be more basic.

The “bog” consists of a more or less circular area of about five acres (two hectares). Surrounding most of the bog are morainic ridges, consisting of glacial till with quite steep sides and rising about 15 to 20 metres above the floor of the bog. This area must have an impermeable base (probably clay), as water was trapped there. Dead vegetation in the water could not decompose due to a limited amount of oxygen. Gradually an acidic peat has filled the area.

In the spring, the bog does overflow. This outflow only occurs for a few weeks during the snow melt combined perhaps with heavy spring rains. One day I walked around the edge and found the outflow.

At other times of the year water runoff from the steep hills surrounding the area do provide oxygenated water to its edges. As a result (pure conjecture on my part) a true bog has not been able to form and the area is treed largely by white pine. Ontario would recognize this wetland only as a swamp because it is treed. I would go one step further and call it an acid swamp.

However there are many mosses and plants within it that make the area very bog-like. It is interesting that around the edges of the area there is a lot of water with un-bog-like plants growing, such as cattails. I presume this is because the water here is richer in oxygen because of hill runoff. Also the peat has not been forming to raise the level of land around the edges, as has happened further away from the hills.

The text above would describe this area before surveyors came to mark out roads. Their job was to lay out a grid of roads a certain distance apart, without regard for anything that stood in the way; through swamps and over cliffs, it did not matter. This resulted in an east/west road right through the bog, leaving about 10 per cent of it on the north and the rest to the south on the NCC property. 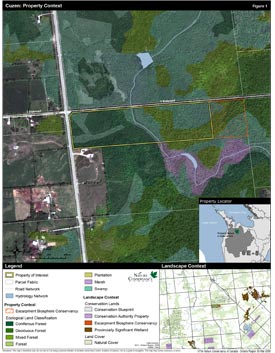 The road has caused a major disruption to this natural area. It has allowed more sunlight and probably more water runoff into the area. Because the water flows north, the major disruption to the ecosystem is to the north, which is less bog-like and more like a regular swamp. The Cuzen property lies to the south. It must be admitted though that the road has created its own little ecosystem.

This road is just a small sideroad and not even maintained in the wintertime. However a fellow stopped one day, probably wondering what I was doing, and told me that this road used to be the only road into Owen Sound. This seemed strange but on the other hand it does wander back and forth, not staying on the road allowance — which is unusual and does lend credence to the story. I did investigate this and it is true although it may have just been a blazed walking trail at that time.

Almost no one visits the Cuzen property. Probably only one or two cars per hour go by on the road. It is a very quiet and peaceful place. Preparing this little write-up has given me the urge to go back soon. Seeking out-of-the-way places to visit and enjoy should be encouraged more. 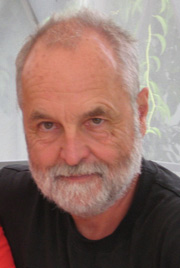