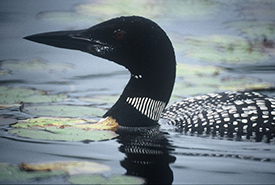 Common loons moult their feathers, starting at the base of their bills, before autumn migration in September. (Photo by Robert Alvo)

In my July 5, 2018, blog, I summarized my findings of over 25 years of examining the effects of lake acidification on common loon breeding success in the Sudbury region of Ontario. Although Sudbury's lakes have improved after decades of sulphur and other compounds being deposited in them and increasing their acidity, the impact of this pollution is still evident today. 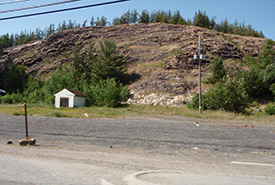 Revegetation has been successful in the city of Sudbury, but 15 kilometres away, there are still obvious signs of damage from the acidity and heavy metals emitted over decades by the smelting of ore. (Photo by Robert Alvo)

We found that no chicks were raised on very acidic lakes (pH less than 4.4), and most of those lakes had no nesting loons. However, one of them did have a pair and a nest during most of the years that we were conducting surveys. There, the loons exhibited odd behaviour: they stayed in one small bay rather than comb the whole shoreline. The parents took turns flying elsewhere to feed themselves while the other parent foraged for the downy chick. The tiny food items were strings of algae and probably dragonfly nymphs since no fish or crayfish lived in the lake. 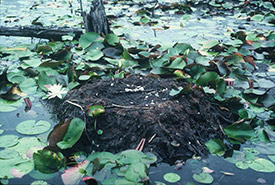 On some lakes, loons may build platform nests out in the open, making them more vulnerable to aerial predators. (Photo by Robert Alvo)

The chick foraged for itself, and even climbed onto shore, chasing after something. When back-riding, rather than sitting up straight, it often lay on its belly at the back end of the parent, with its feet dangling in the water. Not surprisingly, no chicks lived long enough to fly from this lake.

On lakes with pH slightly higher than 4.4, chicks were raised successfully on some lakes, but only if the lakes were large. On larger lakes, the extra foraging area available to the one pair (I studied lakes with only one pair) seemingly compensated for the low food density caused by acidity. In contrast, a 20-acre (eight-hectare) non-acidic lake was consistently successful. 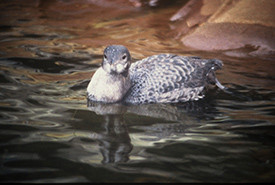 This common loon chick swallowed a fish that was too large for it, paralyzing its digestion so that food accumulated in its esophagus to form a bulge. (Photo by Robert Alvo)

A case in point involved two large acidic lakes (combined area 346 acres/140 hectares) that were connected by shallow rapids. I watched as a family of one parent and two chicks swam underwater through the shallow rapids from one lake to the other — proof that they were using both lakes. The chicks stayed very close to the parents, and they begged continuously, the sound carrying up to 200 metres — another behaviour I had never observed on non-acidic lakes.

On one of those two lakes, adults made extremely long dives, averaging 99 seconds in duration. On non-acidic lakes, adults foraging for chicks of the same age would dive for only about 40 seconds. Presumably the acidic lakes had fewer fish, forcing longer dives.

In 2018, more than a decade after my last surveys, we found a clear decrease in acidity. Of the 49 lakes we surveyed, 45 had decreased acidity, with only four (all non-acidic) showing an increase.

Also in 2018, our Sudbury loons had a poor breeding year, as was the case in 1996. I suspect short breeding seasons resulting from late ice break-up in the spring. “Ice-out” dates can vary by 42 days from year to year in the region. We consequently hope for a “normal” 2019 spring to find out whether loon breeding success will increase in conjunction with the reduced acidity of the acidic lakes.

This more recent research was made possible through a collaboration between me, Doug Tozer, PhD, Bird Studies Canada, Mark Mallory, PhD, Acadia University and hopefully in the very near future (finances pending), Kristin Bianchini, PhD, as part of her post-doctoral fellowship. 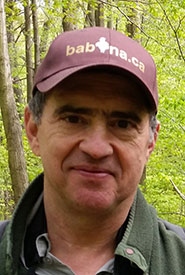