Support local biodiversity by avoiding invasive plants in your garden 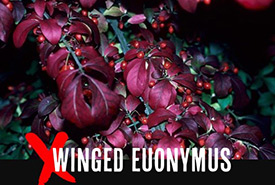 With gardening season upon us, the warm weather brings hope that your favourite plot of soil will be better than it was last year. At the Invasive Species Centre, we have one request as you mull over your garden plans for 2019: please avoid the many invasive plant species that are widely available at nurseries across Canada.

One of the biggest sources of invasive plants comes from gardens. Some plants can rapidly take over a garden, forming root systems that are hard to remove and making it impossible for other plants to co-exist. They can then escape from gardens to take over nearby areas. And when landowners put them into the compost for disposal, they escape from there, too.

It’s important for gardeners to be aware of what invasive plants to watch for, as they can be mislabelled or hidden in variety pots at nurseries and flower shops. By sticking to native alternatives, you are protecting biodiversity, investing in your garden’s health and longevity, and saving yourself a bundle of trouble!

To get you started, we have assembled five invasive plant species to avoid when thinking about a garden refresh in 2019. Instead, consider planting native species based on garden conditions, plant hardiness zones and your location in Canada. Happy gardening!

Burning bush, or winged euonymus, is an invasive shrub used in ornamental plantings across North America. This commonly found species is often selected for its brightly coloured foliage. However, it has been known to escape into natural areas and form dense colonies that outcompete native plants. Although its berries would seem to be important for hungry wildlife, native shrubs — including dogwood, chokeberry and highbush cranberry — offer better food sources for many species of wildlife. 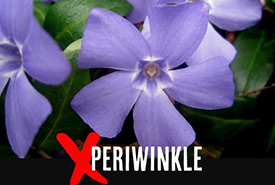 This species of commonly used groundcover is one of the most challenging invasive plants to remove, once established. Although it can be contained when used in pots, it has been found to “escape” the confines of many gardens and expand into neighbouring natural areas. When established in the understory of deciduous forests, periwinkle can outcompete native wildflowers, such as trillium, and contribute to reduced local biodiversity. 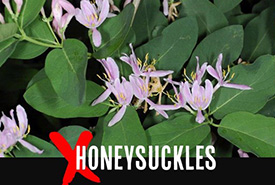 Several widely available species of honeysuckles are often collectively referred to as exotic bush honeysuckles. Although their showy, early-season flowers may suggest that they are pollinator-friendly, these non-native shrubs don’t provide the same benefits that many of our native shrubs do. Invasive honeysuckles often form dense understories in the deciduous forests they invade. This results in limited plant diversity. Native shrubs, such as nannyberry, serviceberry, ninebark and dogwood, offer wonderful aesthetic additions to gardens as well as high-quality resources for native wildlife. 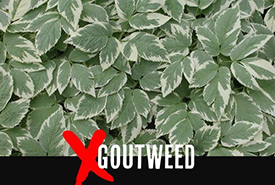 This widely used groundcover has been known to creep over property boundaries into nearby gardens and natural areas. Native alternatives, such as wild geranium, running euonymus and foam flower, offer greater aesthetic and wildlife benefits than this invasive plant does. Unfortunately, goutweed is very difficult to eliminate due to its persistent small roots and dense growth form. How many other garden invasive species have their own support groups on Facebook? 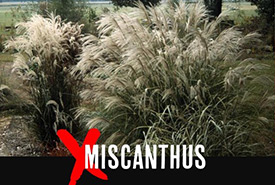 Sometimes called the “next phragmites,” this invasive grass has been used to add vertical appeal to many gardens and is a relatively common species found in many larger nurseries. This plant has escaped into the natural environment, including roadsides, wetlands and grasslands. In areas where it invades, miscanthus forms dense populations that prevent native plants from growing. The showy stalks can be seen along highways in many parts of Eastern Canada, including Ontario and Quebec. 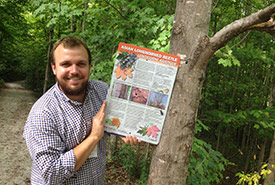 Colin Cassin is the policy and program development analyst at the Invasive Species Centre (ISC).