There is no abrupt line marking the edge of Canada’s prairie region. No sign on the highway saying “thanks for visiting.” In western Canada, grasslands gently rise and merge into the forested foothills of the Rocky Mountains. Along their northern edge, the Aspen Parkland is the wide transition between prairie and boreal forest.

In the east, the meeting place of grassland and deciduous forest was once a broad gateway of tall grass prairie. But it’s hard to find this gateway today. It’s almost gone. Not all hope is lost, however; there is a success story that shows the impact of habitat conservation and land stewardship. And that story belongs to the small white lady's-slipper.

Tall grass prairies are dominated by grasses, such as big bluestem and Indian grass, that can grow taller than a human (or bison). They boast a rich diversity of wildflowers with names like blazing star, coneflower, indigo and prairie lily. Their soils are rich, and with their sparse tree cover were quick to be turned by the settlers’ plows.

In Manitoba, more than 99 per cent of the vast areas of tall grass are gone. Ontario’s pockets of tall grass fared little better, with an estimated loss of over 97 per cent. 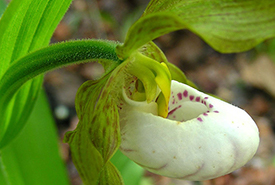 As tall grass prairies declined, they took many species with them. In Canada, the small patches of remaining tall grass in Manitoba and Ontario are among Canada’s hot spots for endangered species. This includes small white lady's-slipper. This orchid sometimes only grows to 15 centimetres in height and when in flower typically produces a single white “slipper.”

The main range of the small white lady's-slipper is centred in the tall grass prairie region where it grows in moist prairie openings. In Canada, almost all plants are found in tall grass habitat, with a few outliers, including a small population that grows in a wetland in an eastern Ontario provincial park. Most of the Canadian population of this orchid is found in Manitoba’s Tall Grass Prairie Preserve and Ontario’s Walpole Island First Nation.

Small white lady's-slipper once ranged from Saskatchewan, east to New York and Virginia, and south to Missouri and Alabama. Today it is rare in every state and province where it still occurs. Around the edge of its range, including Saskatchewan and Pennsylvania, it’s gone. Because of habitat loss, it’s been on lists of rare species in both the U.S. and Canada since the 1970s and was one of the first plants to be put on Canada’s list of endangered species. In 2013, small white lady's-slipper was assessed as globally vulnerable on the IUCN Red List of Threatened Species because of its small range and declining populations.

Fortunately for orchids, they are very showy and charismatic. This has aided in our knowledge of their distribution and status, and in their conservation. But even conservation areas do not protect many tall grass species from disappearing. These places need the natural processes that keep tall grass prairie healthy, including regular fires and floods. In some cases, natural processes can be replaced by well-timed livestock grazing, haying and mowing. At some sites, small white lady's-slipper habitat has become limited to the tiny strip of grassland that survives between roads, and row crops where periodic mowing is inadvertently helping to maintain tiny patches of tall grass prairie.

But there is a conservation success story for this orchid and its habitat that is beginning to blossom. In 2014, a reassessment of the small white lady's-slipper in Canada found habitat protection and management had increased, and a few new sites had been discovered. There are now about 22 sites left in Canada and at least 22,000 plants. More importantly, the largest populations are now managed for conservation. As a result, after being listed as endangered in Canada for 33 years, the small white lady's-slipper was assessed at a lower risk of extinction and down-listed to threatened.

Today, the large population of small white lady's-slipper on Walpole Island in Ontario is being managed through traditional burns, land agreements and securement by the Walpole Island Land Trust. In Manitoba, the Nature Conservancy of Canada has been working for over 25 years with Nature Manitoba, Manitoba Conservation, the Manitoba Habitat Heritage Corporation and other partners to protect the Tall Grass Prairie Natural Area.

Local municipalities and many landowners are adopting practices that are helping to protect its habitat. This work has been funded by Government of Canada’s Nature Fund, including the Natural Heritage Conservation Program, Environment and Climate Change Canada’s Community Nominated Priority Places grant, the province of Manitoba, corporations, foundations and hundreds of individuals. Today, over 2,000 hectares (4,942 acres) have been protected and are managed for conservation. In addition, NCC operates The Weston Family Tallgrass Prairie Interpretive Centre and is continuing to identify critical conservation research needs and restoration opportunities to conserve this globally significant ecosystem.

Small white lady's-slipper and its habitat still face many issues. Tall grass prairie continues to be lost, and natural processes are disrupted by artificial drainage and fire suppression. Invasive species such as leafy spurge and European common reed threaten the small habitat patches where it remains. Orchids are still illegally collected and sold. It is still a species of great conservation concern, but thanks to conservation efforts its outlook is improving. In a world where many rare species are continuing to decline, this improvement in status is a success worth celebrating.

Many conservation issues are now operating at a global scale and finding the solutions can sometimes seem overwhelming. But for many species, the solution is straightforward. We need to protect their habitat. By identifying key areas for rare and endangered species, working with local communities, and securing and managing the most critical habitats for conservation, we can help other many other Canadian plants and animals begin their story of recovery.