The best defence is an eco-fence! 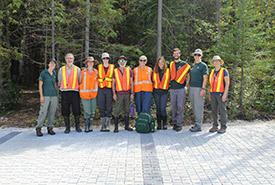 Ontario’s Saugeen Bruce Peninsula is well known for its unique biodiversity and natural beauty. As budding naturalists with a particular interest in reptiles and amphibians, my husband and I jumped at the chance to participate in the Nature Conservancy of Canada’s (NCC’s) Conservation Volunteers event to install eco-fencing in the Bruce Peninsula National Park this fall.

A crew of 12, made up of five volunteers from the general public, three NCC staff and four Bruce Peninsula National Park staff, gathered in the Singing Sands Beach parking lot on Dorcas Bay Road for a 9 a.m. start.

The goal was to install approximately 80 metres of eco-fencing on either side of Dorcas Bay Road. As part of the park’s “On the Road to Recovery” project, this eco-fencing event is a continuation of conservation efforts by park staff to prevent reptiles and amphibians from crossing roads in high traffic areas where road mortality is a concern. The idea is that low fencing guides animals to eco-passage tunnels under the road, which allow for safe crossing. The fencing system is made by Animex in the UK, comes in 20-metre rolls and is made of high-density polyethylene, which is UV-resistant and very durable.

The NCC property bordering Dorcas Bay Road, called Gunn, was transferred to Parks Canada in 2014 because it was within park boundaries, and Parks Canada was already managing visitation in the area.

We began our work day after doing introductions and receiving safety instructions from Esme Batten, NCC’s coordinator of conservation biology for the Saugeen Bruce Peninsula, and following an explanation of the fencing system from Tricia Stinnissen, resource management officer for Parks Canada. 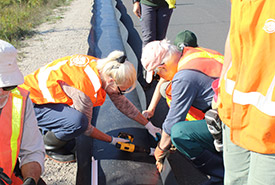 The first step was to unroll and lay the material flat on the road. Then the top and bottom lips (which prevent animals from slipping under or climbing over) were folded to create a flat U-shape. The material was very stiff, so crew members walked single file along the edge to press down the fold. Next, hand drills were used to drill holes four feet apart in the top and bottom folds. Plastic posts were threaded through the holes to create the upright support. 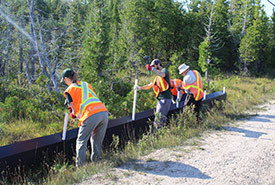 We lifted the assembled section into place and then pounded the stakes into the ground to secure the barrier. As we were working in the ditch and fen, some areas were wet and relatively soft and others were harder.

We quickly became proficient at preparing the fencing for installation. In less than five hours, we installed eight rolls.

During water breaks and lulls in activity, we enjoyed asking the staff questions about local flora and fauna, conservation projects and the life and work of environmental scientists. Everyone was very friendly and engaging and a pleasure to spend time with. 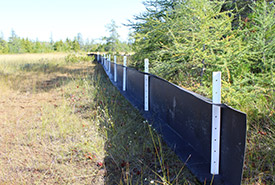 Our reward for a good day’s work (apart from the satisfaction of assisting wildlife conservation) was a guided interpretive walk of Singing Sands.

We had a private tour with six professional naturalists on hand to point out and explain the unique characteristics of the native wildflowers, trees, grasses, snakes, fish, turtles and complex ecosystems, such as dunes and fens.

The entire area has undergone extensive work in the past year, including a beautiful new pavilion, with washrooms, a water station, picnic area, viewing platform and relocated parking lot. 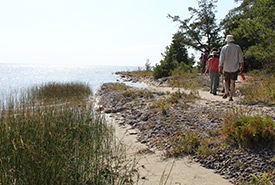 The former parking area is being restored to its natural state and has been planted with native grasses and plant species.

The new boardwalk has been raised to avoid damaging the fragile ecosystem, and it allows wildlife to move freely through the landscape. Large, colourful interpretive plaques provide visitors with information about the many varieties of rare plants and animals that live in the area.

All in all, it was an excellent experience and I highly recommend participating in NCC Conservation Volunteers events. We met people with similar interests, learned a lot about a beautiful and unique ecosystem and contributed to an important conservation project. It was a great citizen-science adventure! 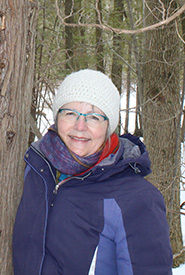 Christine Roberts moved to the shores of Lake Huron in southern Bruce County after a career in education. She and her husband share a passion for citizen science and regularly volunteer with a variety of local environmental groups throughout Huron and Bruce Counties.