The blitz of the burdock brigade 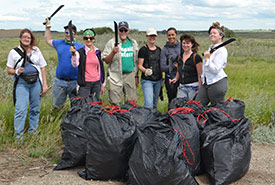 Thanks to the Nature Conservancy of Canada (NCC), I can now cross off my bucket list my long-nurtured desire to hack away at invasive burdock plants with a machete. In truth, I’d never entertained the idea before signing up as a Conservation Volunteer for a burdock blitz at NCC’s Fairy Hill property north of Regina. NCC actually manages three Fairy Hill properties. Our blitz on a Saturday in mid-July was at Fairy Hill 1, a 1,600-acre (648-hectare) property on the edge of the Qu’Appelle Valley, and located beside a major north-south highway.

As I hunched down, hacking away at another burdock plant, the branch of a wolf willow shrub lifted the ball cap off my head. Oh my. I received a quick, first-hand education about why common burdock is designated as an invasive plant and a noxious weed. The burdock had established itself under a tangle of wolf willow and other shrubs, making it extremely difficult to cut close to the ground, but a great place to colonize.

The earlier part of the day was much easier. Burdock, it seems, also thrives in the cracks of the old provincial highway (Highway 6), which appears here and there on the property. Teaming up with Breanna Silversides, who is working what she calls her summer dream job as a GIS assistant in NCC’s Regina office, within an hour we filled an industrial-strength garbage bag with burdock, all without straying from the crumbling pavement. 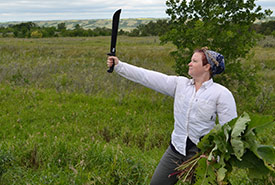 Why is common burdock labeled a noxious (harmful, poisonous or very unpleasant) weed? Here’s the lowdown, according to NCC and Google: common burdock produces large, sticky burs that are devilishly designed to transport the plant’s seeds by getting entangled in the hair of livestock, the fur of wildlife and the wings of small birds and bats. That might be irritating for animals, but birds and bats can die a slow death if they are weighed down by burs.

Burdock is a biennial plant, which means if you cut the large leaves (which look similar to rhubarb) during the first year of growth, you prevent the development of the burs that plague animals, birds and the occasional human. And, it also inhibits the further expansion of this nasty weed.

By the end of the day, the entire tired-but-happy brigade gathered for photos beside an impressive mound of garbage bags containing invasive-no-more burdock.

NCC calculates the in-kind value of our volunteer work at $3,475, with approximately 140 kilograms of burdock collected. Still, in my mind I knew there was more burdock out there, waiting to be hacked and removed. In a thank you scrapbook I received from NCC about a week later by email, NCC strongly hinted that there will be Burdock Blitz 2.0 in the summer of 2019. And I’m ready for round two.