The boreal forests of Wilson Island 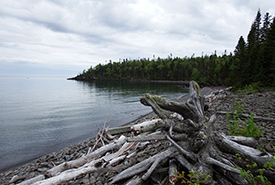 Wilson Island, ON (Photo by NCC)

It was time to do a deep dive into the boreal forests of Wilson Island, near the north shore of Lake Superior. The Nature Conservancy of Canada (NCC) acquired these amazing 5,000 acres (2,023 hectares) in 2008, and it was time to conduct an inventory of the species and vegetation communities on the property. Before two coworkers and I flew north to Thunder Bay from Guelph, drove two hours east to Rossport and boated 25 minutes south, I was preparing for the trip and staring at the aerial photo of Wilson Island thinking, “That forest looks dark. And thick.” Little did I know!

Previous monitoring visits had included boat rides around the island to check out the safe harbours for kayaks and ensure these areas weren’t encroaching into the forests or that litter/dumping wasn’t a significant issue. I’d occasionally jot down the sighting of a neat bird flying over, and examine the unique plants growing out of the shoreline cliffs to add to our species list. It was a literal and figurative day at the beach! 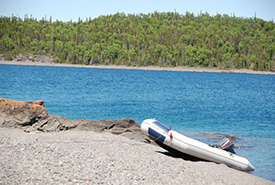 But there were inland lakes to explore, mossy wetlands to examine and forests to classify. We were going in. Along with Pays Plat First Nation partners Gary and Andrew and fellow NCC staffers Laura and Brenda, our team armed ourselves with water and snacks, and then essentially flung ourselves into those thick, dark, coniferous forests.

Classifying them was easy enough: balsam fir. White spruce. 100 per cent canopy closure. Zero per cent ground cover. It was when it was time to get ourselves to the next area, that gorgeous lake just a mere one kilometre away, that things got…real. 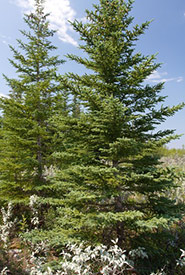 The densely packed coniferous trees were playing a childhood game of Red Rover with us, their arms tightly held together, not yielding to the warm bodies trying to push through their spiky boughs. Occasionally I’d find a path forward through the trees and march determinedly ahead, just to find that one of the spruce trees had inserted a branch slyly between me and my backpack strap, and would fling me backwards when I reached the end of its tether. My sunglasses were sneakily lifted off my head by wooden hands. A sturdy looking log underfoot would turn out to be fully decomposed, only just holding the shape of its former self, while my leg crashed through up to my knee into a pile of dust, moss and wet wood.

Sometimes, we’d catch a break and hook onto a moose trail that led to its favourite watering hole — something else had forged our path! We’d emerge into the oasis of the inland lake or mossy, sponge-floored wetland and breathe a sigh of relief at the space, the open, the rest. Battling paths through those forests was some of the toughest field work of my career, but the information we gained about the intact, high-quality nature of the ecosystems was well worth it. 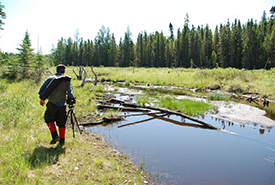 A mossy wetland on Wilson Island (Photo by Michelle Derosier)

Reflecting back now, seeing how much I gave the forest a personality of its own, I think that perhaps the forest did have some autonomy, some ideas, some power. After years of being intermittently cut down for activities such as timber harvesting and mineral exploration, the trees perhaps did whisper to one another that they were back; they were putting roots down, and they were not budging again.

For the forests of Wilson Island, this is indeed the case, being forever protected in conservation. I like to think I can hear their murmurs on the wind, talking amongst themselves, readying for their next visitor.