The foxes of NCC 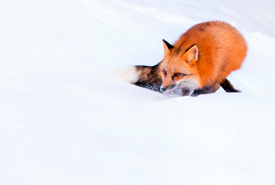 Growing up, my favourite book was Roald Dahl’s Fantastic Mr. Fox. It was no surprise that the Christmas following the first time I read (and then re-read over and over) the ionic children’s novel, I asked Santa for anything and everything relating to the species it features: the red fox. Years later when I found out my favourite director, Wes Anderson, would be creating an animated feature (of the same name) based on the book, I was elated, and it is now my favourite film of all time. It seems as if the red fox has been following me my entire life — still occupying a special place in my heart and, now, in my career.

Reading about species, both in fiction and non-fiction, is what sparked my interest in writing about the environment and how we can protect it for the species that live there.

The Nature Conservancy of Canada (NCC) protects habitat for red fox, and many other fox species too. In fact, we protect habitat for all four Canadian fox species.

Learn more about how we’re conserving land for the many Mr. (and Mrs.) fantastic foxes, below. 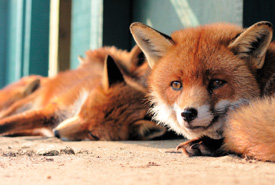 Despite their perceived boldness and cunningness in children’s stories, including in Fantastic Mr. Fox, red foxes are actually shy and nervous by nature. They are great hunters due to their acute eyesight, hearing and sense of smell. These foxes are able to trace prey by the slightest movement, like a rabbit’s ear twitching or a mouse moving its tail.

NCC protects habitat for this species across Canada. For example, in Saskatchewan, NCC is protecting 13,088 acres (5,297 hectares) of land at the Old Man on His Back Prairie and Heritage Conservation Area for many species, including red fox. Across the country in PEI, NCC is protecting 55 acres (22 hectares) of salt marsh and coastal forest along the Enmore River. This area is located in one of only two forested wildlife corridors remaining on the Island and is important habitat for red fox, ruffed grouse, snowshoe hare and many species of birds. 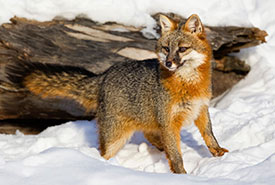 Distinguished by a prominent black stripe on its back and tail, the gray fox has a grizzled gray coat with cinnamon-coloured areas on its neck, sides and legs. Males are slightly heavier than females, averaging 4.1 kilograms.

The gray fox is the only canine species in the Western Hemisphere that can climb trees. Thanks to sharp, hooked claws it can also jump from branch to branch. With bobcats, coyotes and dogs as its predator, it must remain watchful and the ability to climb trees is beneficial to its survival.

This fox can be found in forests, farmlands and old fields in parts of Ontario and Manitoba, to northern South America. Gray foxes make their dens in rock outcrops, hollow trees, underground burrows dug by other animals or piles of brush.

One of the few places in Canada where gray fox is regularly observed is Middle Point Woods on Pelee Island. In 2013-2014, NCC worked with researchers on the island to better understand the ecology of this elusive fox. 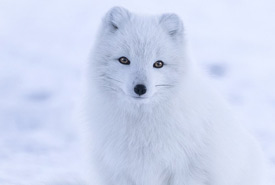 Arctic fox is one of the smallest members of the canid, or dog, family in Canada. They measure up to 115 centimetres in length and males can weigh up to nine kilograms — about the size of a large domestic cat. They have a white coat during snowy winter months and a darker coat that’s more brown or bluish-grey in the summer.

In Canada, the Arctic fox lives across the Arctic and northern boreal region, from the Yukon through to the island of Newfoundland, and from the northern tip of Ellesmere Island to the southern tip of James Bay. Its wide distribution in this harsh environment is credited to its ability to adapt to freezing temperatures and its diverse diet.

NCC helped protect lands for the establishment of Vuntut National Park in the Yukon, where the Arctic fox can be found. 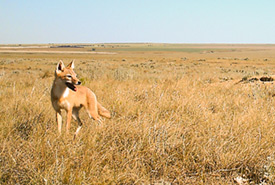 The swift fox is the smallest fox species in North America and is smaller than most house cats. It has black spots on both sides of its nose and on the tip of its tail. It is named for its speed, reaching over 60 kilometres per hour on average. Unlike other foxes, the swift fox uses dens located on well-drained slopes near fresh water throughout the year. They are mostly nocturnal, hunting mainly at night, but will sun themselves around their den during the day.

Once extirpated from Canada entirely, swift fox populations have been successfully reintroduced throughout parts of the prairies. In 1983, the Cochrane Ecological Institute launched a program to reintroduce swift fox to parts of its former range in Canada. This was done in partnership with Canadian Wildlife Service, the Governments of Alberta, Saskatchewan and Manitoba, University of Calgary, World Wildlife Fund and Agriculture Canada.

Today, it is estimated that there is a small, relatively stable population of about 100 wild swift foxes in Alberta. Approximately 647 individuals are known to reside in Saskatchewan. Most are offspring of the released animals. This population is classified as threatened under Canada’s Species at Risk Act, as their small population is still very vulnerable.

Although there have been several conservation success stories for this species, they are still considered threatened in Canada. It is important that their habitat in the Canadian prairies, the world’s most endangered ecosystem, is protected.