The language we all speak 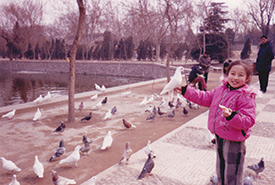 One of the most common questions people ask me is why I chose to study conservation. For a long time, I couldn’t answer that question.

Unlike most of my classmates and fellow interns at the Nature Conservancy of Canada (NCC), I did not grow up with Canadian nature. In fact, I grew up in Handan, China, a city in the midst of economic development, where skyscrapers were continuously erected and torn down in just a matter of weeks. My grandmother was the only person in my family who had grown up on a rural, natural landscape, a relic of pre-industrialized China. Because she came from a family that owned an apricot farm, my childhood was marked with occasional visits to the countryside. But these trips were rare and constituted most of my family’s interaction with nature.

When my parents decided to immigrate to Canada, it was not an easy task. From grasping the English language to job security, there were a lot of difficulties that came with adjusting to a foreign culture. Moving into our new Canadian home at age nine, I found myself feeling homesick in the unfamiliar environment of suburban Ontario. 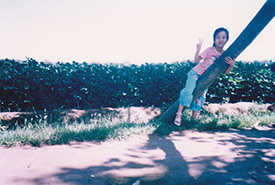 Unlike most of my classmates and fellow interns at the Nature Conservancy of Canada, I did not grow up with Canadian nature. (Photo courtesy of Hai Lin Wang)

During my time here at NCC, I was introduced to another intern like me — Perrie Mohandesi, an engagement intern based in Alberta. Hailing from Tehran, Iran, Perrie and her family first immigrated to Vancouver, BC, but currently reside in Edmonton, Alberta.

The suburbs where the 16-year-old Perrie and her family moved to were decorated with vast, green lawns and large backyards. At school, she felt surprised by the stories of her classmates who had grown up on ranches, swam in local lakes and frequently hiked at nearby national parks. Even though her family had vacationed in the coastal Iranian city of Rasht before, it wasn’t close to nature.

“Exploration of the great outdoors seems to be deeply ingrained into Canadian culture,” said Perrie.

Coming from developing countries, both Perrie and I agree that our cultures perceive nature a bit differently than Canadians. Due to the disparity in opportunities between urban and rural areas in developing countries, most people would rather live in cities than in the countryside. As children growing up in these hyper-urban environments, it was hard to have much connection with the natural world.

Having lived in Canada for around six years, slowly but surely, Perrie built a new relationship with Canada’s landscape.

“The first time I went camping was last year,” said Perrie. Inspired by her classmates, she sought to explore the Canadian nature around her. From walking on the beaches of Vancouver to hiking in Alberta’s national parks, Perrie fell in love with Canada as she saw first-hand the ocean and greenery around her. 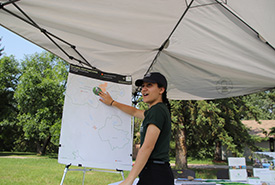 But Perrie didn’t forget about her past. In these mountains, forests and campgrounds, she was reminded of the Persian stories and poems that described the landscapes of Iran and the deep appreciation her culture has always had for nature.

Similarly, I also became comfortable with Canada through its natural landscapes. I remembered my grandmother’s family apricot farm and the scenery of China’s countryside that I had forgotten while living in the city. When I was homesick and everything felt foreign, nature remained familiar.

Perhaps this internship at NCC is the perfect opportunity for both Perrie and me to learn more about the landscapes that introduced us to Canada. Communicating the wonders of Canadian nature with NCC’s Conservation Volunteers, donors and blog readers, I realized that there are still so many hidden natural areas, species and ecosystems around me that I have not yet explored.

In her job as an engagement intern, Perrie’s ultimate duty is to encourage strangers to venture out into the great outdoors. Throughout her internship, she has concluded that people have different perceptions of what conservation is, but this is what makes Perrie the perfect engagement intern in her province. She has met Albertans of various backgrounds — from ranchers to new immigrants — and can effectively communicate with everyone thanks to her own multicultural background. 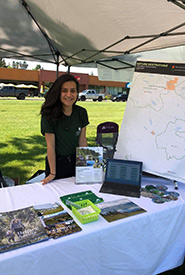 As an engagement intern, Perrie's ultimate duty is to encourage strangers to venture out into the great outdoors. (Photo by NCC)

“Conservationists need an open mind,” said Perrie. She understands the importance of a multicultural perspective when it comes to conservation. Globally, there are seven continents and nearly 200 countries with their own perception of nature, knowledge and conservation practices. For conservation to be effective, local knowledge should be incorporated into scientists’ practice.

It’s also why she places so much significance on Traditional Indigenous Knowledge.

“Indigenous communities have been using this land for way longer than us,” says Perrie. “There are things we should learn from them if we want to conserve the landscapes that they have known for centuries.”

After speaking with Perrie, I know now why I chose to study this field. Nature is a language that we all speak, a culture that we all share, and what makes us all citizens of Earth. It knows no borders. Just listen to the birds, the rustling leaves and the raindrops outside, and you are bound to find someone — no matter how far away — listening to the same thing.