This year we mark the centennial of the convention between the United States and Great Britain (for Canada) for the protection of migratory birds — also called the Migratory Bird Treaty — that was signed on August 16, 1916.

A century ago, it was an era when many bird species were threatened by fashion! Today you might not look twice at a hat with a feather in the brim, but I bet seeing a hat with whole dead bird (or multiple whole birds for that matter) might warrant a double take. In the late 1800s, though, bird hats were so popular that hat makers were harvesting millions of birds each year. Most people didn’t think much of killing the birds and had no idea they could put a dent in an animal’s population.

Birds were so abundant, they were deemed an inexhaustible natural resource. But by the late 19th century, the popularity of the snowy egret plume had nearly wiped out the species' population in the United States.

What did the treaty do?

The Migratory Bird Treaty led to important environmental legislation being passed in both the U.S. and Canada to make it illegal for anyone to take or sell any migratory bird, its parts, nests or eggs unless they had a valid permit to do so.

Why is the treaty international?

Simply put, birds migrate! If you want to protect them, you have to protect the habitats throughout their lifecycle. This international treaty has resulted in continued cooperation among governments, NGOs and other stakeholders in the U.S. and Canada to coordinate conservation efforts for migratory birds, even 100 years later.

Why is this important now?

The state of the birds: Even without a bird hat fashion craze, more than a third of all North American bird species are at risk of becoming extinct unless significant action is taken.

With the treaty in place, few people are harvesting migratory birds without following federal regulations. However, habitat loss is a huge threat to migrating birds. Migratory birds depend on suitable breeding and wintering grounds and stopover sites, where they can rest and feed along their migratory routes. The loss of any sites used by the birds during their annual lifecycle could have a dramatic impact on their chances of survival.

Where we have invested in healthy habitats, birds are doing well. And healthy birds mean healthy forests, wetlands, grasslands, shorelines and oceans. By conserving habitat we conserve our landscapes and the economies and ways of life that depend on them. From farmers and ranchers to outdoor recreationists and children, we all benefit when birds thrive.

Today, as a result of a treaty 100 years ago, governments, NGOs and partners across the U.S. and Canada continue to work together to protect migratory birds. Every year, the Nature Conservancy of Canada (NCC) and other partner NGOs participate in the North American Wetlands Conservation Act (NAWCA) funding program and secure significant habitat for migratory species. And funding from the NAWCA program is matched by donations from Canadians and Americans to deliver significant results we can walk on (and birds can nest on).

To date, NCC has secured 350,000 acres (142,000 hectares) of habitat for migratory birds and other wetland species under NAWCA.

Want to help? Get involved!

Check out opportunities to view migratory birds with your friends and family. Help them understand why birds matter.

Each fall, millions and millions of birds migrate from northern breeding grounds in Canada to their southern wintering sites.

Here are a few good sites to see them as they fuel up for the journey:

British Columbia: Columbia Lake – Lot 48 in the Canadian Rockies is located within the Pacific Flyway, a major north-south flyway for migratory birds, and is also part of the longest uninterrupted wetland in western North America. The Kumdis River Conservation Area on Haida Gwaii hosts resident and migrating birds, including the endangered sandhill crane.

Alberta: The Clifford E. Lee Nature Sanctuary, located 33 kilometres southwest of Edmonton's city centre, encompasses a variety of habitats including marshlands, open meadows, aspen parkland and pine forest. The site is great for viewing more than 100 bird species. During migration period you may spot many ducks, geese and coots, along with various shorebirds and songbirds.

Saskatchewan: NCC’s Missouri Coteau Natural Area, located in southern Saskatchewan, contains wetlands that are critical for migrating shorebirds. The natural area contains 14 of Saskatchewan’s 53 Important Bird Areas. Three of the lakes within the natural area have been collectively identified as a significant site by the Western Hemisphere Shorebird Reserve Network. NCC’s site, Reed Lake 2, right across from Morse, Saskatchewan on Highway 1, is a great location to observe these migratory birds. There is even an observation tower nearby where you can look out onto the lake and the waterfowl in it.

Ontario: Pelee Island is famed for annual spring and fall migrations; so much so that the annual Festival of Birds is held there. Long Point is another hotspot visitors must visit; it is one of North America's largest migration and staging areas!

Quebec: Pointe de Saint-Vallier, situated on the south shore of Saint Lawrence River, is located in one of the largest migratory corridor for birds in North America and offers refuge to many bird species. Several species of duck visit the place, as well as many greater snow goose, which feed on the batture during fall and spring migrations.

New Brunswick: The Tabusintac Lagoon and Estuary is an excellent place to see waterfowl, while the Upper Bay of Fundy is a hotspot for shorebirds.

Nova Scotia: Brier Island is one of the farthest reaches of Nova Scotia. It boasts ecologically rich wetland and coastal habitats, which support an extremely high population of nesting gulls.

Prince Edward Island: Holman's Island near Summerside is dubbed a "Hotel for Birds." In peak season, up to 2,000 Canada geese and 1,000 Atlantic brants migrate to the area.

Newfoundland and Labrador: The Grand Codroy Valley Estuary is an exceptional place to see thousands of geese and waterfowl during fall migration. Visitors can feast their eyes on migrating young seabirds and waterfowl such as harlequin ducks at offshore and coastal areas such as Cape St. Mary's and Witless Bay.

Consider giving to NCC to participate in migratory bird habitat conservation! Every dollar you donate to an eligible NAWCA project could be matched 3:1 under this funding program. 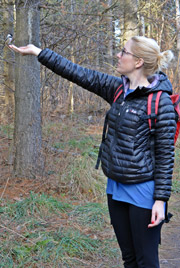