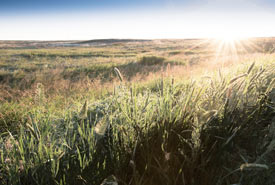 Getting up at 5 a.m. to catch the morning sun cast blinding rays across the grassy plains at Old Man on His Back (OMB), I stood in the receding darkness in awe of the sublime. There was no silence! The din of insects carried on.

An occasional red-winged blackbird added to the orchestra, then suddenly some kind of large animal rustling that worried me for a moment. Off in the distance, I heard what I thought was a coyote calling. At first it was a single voice, then a chorus joined in. Are they real, or sound effects from a TV western? 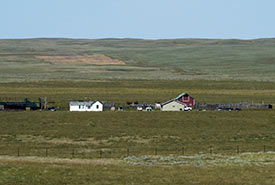 Old Man on His Back located in southwest Saskatchewan (Photo by Gail F. Chin)

You can tell I’m a city slicker out on the land, one of those who Sharon Butala contemptuously regards as “romantic dreamers, nitwits from the city” in her memoir about life on the land, The Perfection of the Morning. I had never heard the calls of coyotes in the wilderness, until now.

Sharon and Peter Butala donated this 13,088-acre (5,297-hectare) property in southwest Saskatchewan to the Nature Conservancy of Canada (NCC) in 1996. 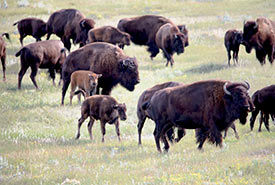 Plains bison herd at Old Man on His Back (Photo by Gail F. Chin) 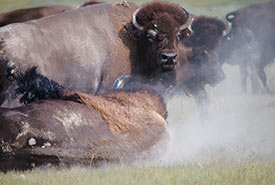 Close up of plains bison in action (Photo by Gail F. Chin)

Then, plains bison were re-introduced in 2003. They roam and graze on this land along with a host of deer, pronghorns, badgers, gophers, foxes, coyotes, hawks, sage bush grouse, cattle, horses, various insects and on and on. They all dwell here on one of few patches of natural mixed grass prairie remaining. 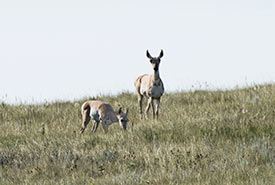 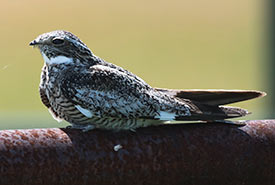 Once in a while, humans visit, like us. We are volunteers, who are here to enjoy the property and help with various small chores around the land, such capping the hollow metal fence posts, mowing the lawn around the various gates, picking up refuse and carrying out a census of the myriad species of plants, insects and animals on the new property opposite the interpretive centre. 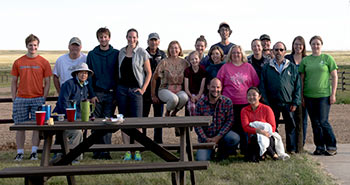 Conservation Volunteers help out with chores around the property (Photo by Gail F. Chin)

Sharon Butala is a prominent Canadian author, as well as a patron of nature conservation. Her award-winning book, The Perfection of the Morning, published in 1994, speaks of her tentative acceptance of country living and acquiescance to a terrible, but calming, nature.

I loved Butala’s book while still living in Victoria, but the real deal was something else; definitely an acquired taste.

I hail from a province of oceans, mountains and forests, therefore the prairie is a very different landscape. The vastness of prairie space both frightened and bored me. It took me many years before I was able to accept where I was.

Walking the land requires no knowledge or skills, but by walking one can acquire those things. Over time as Butala walked, she no longer just saw the property, but the landscape. Landscape can refer to the layout of soil and rock formations in the relation to water, sky and vegetation. As well, it can also be a genre of painting; an art form.

Understanding nature as landscape allowed Butala to transform her experiences to writing. As I now walk the same land, I photograph the landscape to make art. My skills as a photographer were honed as I walked this NCC property and others. 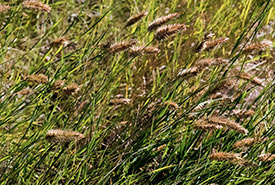 Walking through this natural world, especially in the company of the other volunteers, I am no longer as naïve when I see things that seem alluring. For example, I now know that crested wheat and rainbow-coloured alfalfa that beautify long stretches of silvery grasses and sage are not indigenous to the short grass prairies. Crested wheat was introduced from eastern Europe, as fodder for cattle. As well, it helps to prevent soil erosion. 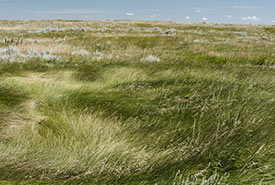 The brilliant yellow and purple alfalfa is another invasive species, brought by settlers who wanted higher yields from their dairy cows and market cattle. Cattle prosper on crested wheat and alfalfa, but bison prefer grasses. They know what home food is!

At OMB some parts of the property are leased to local farmers who graze their cattle there, so that the invasive species are kept in check. In this way NCC forms good working relationships with its farming neighbours.

The introduction of such non-native grasses and other species, along with machines and chemicals, allowed for the prosperity of some. But Peter knew that this land is dry and not very fertile, so to break it and force nature to provide bountiful harvests to pay for luxuries, “a price would be exacted by the land,” as Sharon wrote. Once the land is broken, it takes a very long time before it returns. To conserve this land that “had never been broken since the soil was deposited by the glaciers in the previous geological era” compelled Peter and Sharon Butala to turn to NCC for help. 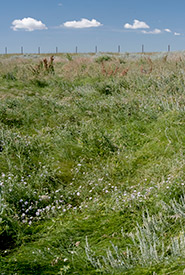 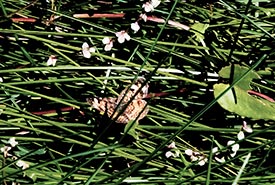 A butterfly among the sheaths of grass (Photo by Gail F. Chin)

In walking this vast prairie, the awesome qualities of nature send chills down my spine. To the insensitive eye, this land looks and feels empty, barren. So lonely! But if you look closely, you will find that the barren land is full. I look down to see tiny pink blossoms lace through the fallen sheaths of grass, while a butterfly bejewels this proud nature. Above, the infinite blue sky is dotted by three fluffy clouds to crown the lengths of this land. 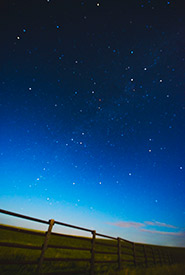 OMB was designated a nocturnal preserve in 2015 (Photo by Gail F. Chin)

In 2015 the Royal Astronomical Society of Canada declared OMB as a Nocturnal Preserve, thereby not only conserving the natural qualities of the land, but also promoting non-obstruction of the heavens by artificial lighting. Moving away from the group at night and counting the Perseid meteors, I turn my camera to the northwest to capture the Andromeda constellation. Indeed, this emptiness fills every frame of my camera.

As the darkness of night is replaced by light, I wait with my lens ready. Indeed my mornings are perfected!