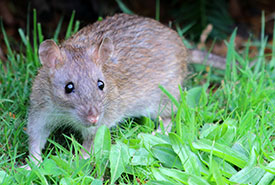 Everyone has a rat story, except for, maybe, Albertans (the lucky ones); I’ll explain why in a bit.

In Hong Kong, where I grew up, rats and mice were collectively called lo shu in Cantonese. The term was probably tossed around by parents to get children to eat without dropping a single crumb, lest the lo shu gets you. My grandma said a big black rat bit her toe in the middle of the night while she was babysitting my cousins some 30 years ago.

Whether you’ve seen one or not, rats have been a major problem around the world. They can chew through power lines, causing fires, and ruin food storages, to name a few impacts to humans.

Disclaimer: There are no native rodents of the rat family in Canada. We do, however, have species with “rat” in their common name: bushy-tailed woodrat and Ord's kangaroo rat, but that’s another story. 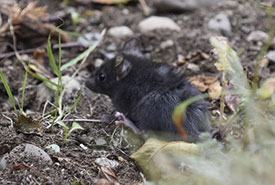 These widespread rodents inhabit every continent except for Antarctica. Black rats, originally from the Indian subcontinent, spread to North America through marine shipping and hold a steady spot on the International Union for Conservation of Nature’s list of 100 of the world's worst invasive alien species.

Brown rats, also known as Norway rats or sewer rats, are thought to have originated from parts of Asia. Every year, they cost industries hundreds of millions of dollars in damage.

Through predation and competition, rats transmit disease and contribute to the extinction or range reduction of native animals and plants. Worldwide, they are responsible for 40 to 60 per cent of all bird and reptile extinctions on islands. In Haida Gwaii, BC, seabird and songbird populations on its 18 islands are threatened by black and brown rats. For a short while, they won back two islands from black rats, but later discovered that the brown rats have taken a foothold. Scientists speculate that the rats swam over from nearby islands or hitched a ride on boats. 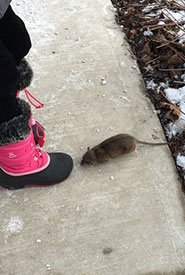 Brown rats prefer ground living and burrowing. They are larger and have a thicker body than black rats. (Photo by aishagk, iNaturalist, CC BY-NC 4.0)

To be fair, I tip my hat off to rats for being so successful. The prolific nature and omnivorous diet of these opportunistic species allows them to establish populations around the world. For these very reasons, they’ve also become a pest where humans live, work and play.

In Canada, black rats, once limited to the coast of British Columbia, can now be found further inland and in some areas of eastern Canada. Brown rats, on the other hand, inhabit every province, except one.

I was shocked (and later impressed) to hear my colleague say that Alberta managed to keep rats out of their invisible borders. Turns out, Albertans take rat control very seriously. Before rats even arrived, the Agricultural Pests Act of Alberta was in place, which mandated every person and level of government to eliminate the pest to prevent their establishment in the province.

When brown rats arrived in Alberta from Saskatchewan in 1950, the government educated the public on rat identification, the elimination of their nests and food supplies and how to rat-proof buildings. It was all hands on deck; everyone was behind the cause.

The rat control program evolved over the years. Pest control inspectors oversaw bait stations and checked premises and borders for infestations. Public education on rat prevention continues today; Alberta has been rat-free for 70 years. And it’s illegal to keep a pet rat of any type in the province. Now, whenever one shows up, it makes headline news.

The challenge and hope

Rats continue to wreak havoc on wildlife and habitats worldwide, and the fight is not over. While it may be very difficult to completely rid the world of these invaders, as with many invasive species, authorities and everyday folks can take a page from Alberta’s playbook on invasive species prevention and control. On another front, we can do our best to protect our remaining natural habitats that are crucial for native species while fighting off the invaders.