The return of the swamp forest 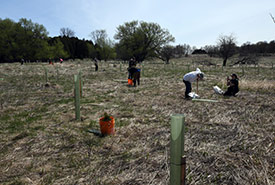 Imagine, if you will, an abandoned-looking farm in the southern Ontario countryside. You park your car and start walking into the back sections of it. After a while, you find yourself in a thickly grassed and soggy area with a tiny stream running through it. There are a few groves of trees here and there, and some solitary trees that seem almost sunken into the stream bed. The fields around are all thick with grasses, but there is no evidence of a crop. Given how wet the land is, one has to wonder what the farmer used to (try to) grow there.

Such was the location of my first tree planting venture with the Nature Conservancy of Canada (NCC) — the owner of the property in the Minesing Wetlands area. Whatever the land had been used for in the past, it had clearly been abandoned for a while. Our job was to help rebuild the natural habitat, which is a swamp forest.

My intentions were to learn about the process and strategy of habitat restoration as well as to meet some people who are experts in such things. I have dreams of buying my own land and returning it to a natural state, or at least maintaining a forest that I might find on it. So the more knowledge I was able to gain, the better.

Our group of a couple dozen people was well led by Brittany Hope, NCC’s conservation biology coordinator for Georgian Bay-Huronia, with superb assistance from Shannon Stephens of the Nottawasaga Valley Conservation Authority. Along with them were a mix of novices such as myself, experienced volunteer tree planters and others with vocational or educational interest in such projects.

I truly wondered how much could happen in the five hours that were set aside, let alone how much I could learn toward my own goals. I was fairly sure I could survive the five hours with the schedule provided. I was to be greatly surprised on the upside of my expectations. 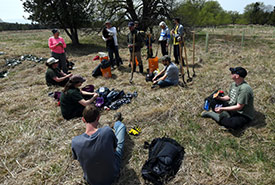 The group succeeded in planting 900 trees — a combination of cedar, pine, red maple and oak — that were suitable to the area. We were told to be on the lookout during our walk through the upland portion of the property for bobolinks, birds reputed to sound somewhat like R2–D2 of Star Wars fame. For myself at least, the mission was accomplished on that account — I love birds and this new one (to me) had become an instant quest.

I am 65 and in reasonable shape. I'm sure the average age of the group was much younger, but nobody seemed to have any problems fulfilling their duties. The hardwood trees were planted with tube tree guards, and stakes for protecting them in their early years from deer and the like. The evergreens were planted using plastic-like sheets on the ground to allow them to grow freely without being smothered by the grasses.

Many of us arrived not knowing anybody else, but there was an immediate camaraderie and willingness to do whatever was necessary to accomplish the task.

The reason for planting these trees is that they belong in the swamp forest and will, over time, grow and destroy — through shade — the invasive grasses that do not belong there.

I imagine that in 20 to 40 years people are going to return here and see a wonderful habitat of swamps with appropriate wildlife living in it. What we are probably not going to see are ash trees, which we did not plant, although they belong there. Ash trees are being devastated by the invasive emerald ash borer.

We started with good, concise instructions about the purpose of what we were doing and how to go about it. We then had some snacks, and Brittany and Shannon started to share some information on the local fauna and flora. 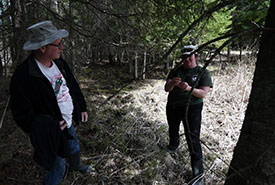 Walking through deer thoroughfare and learning all about nature and evidences of wildlife along the way. (Photo by Robert Britton)

They then led us into the forest for a bit of a nature walk, which was extremely informative. They touched on praying mantises, invasive garlic mustard plants and their characteristics, and crack willows, which have medicinal aspirin properties, as well as regenerative properties similar to those of stem cells in humans. We learned how some of the elm trees, which were devastated by Dutch elm disease years ago, have now shown resistance and are coming back in some parts of the province with some help from conservation agencies. 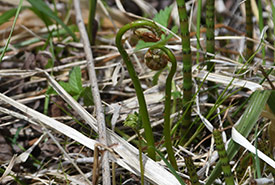 Fiddleheads spotted on our nature walk. (Photo by Robert Britton)

We saw fiddleheads, horsetails, hawthorns, woodpecker holes, coyote poop with deer fur in it, some animal artifacts, such as jawbones and feathers, and one very lively, tiny gartersnake.

We walked on a path that deer and other wildlife used as a  thoroughfare. Most of these things I would have simply walked by obliviously, in spite of my natural curiosity and love for nature. But with Brittany and Shannon as guides, we were given a mini-lecture on the place of each of these items in the environment.

I believe that all of us felt successful and fulfilled by the end of the day. Most of us felt incredibly enriched through both the experience and the in situ nature lectures.

I don't think anyone was much worse for wear, despite the fact that some of us were a bit on the older side. By the end of the day, a good part of our Saturday remained for us to do whatever we wanted. I felt that I made some valuable contacts and I believe that I will become better acquainted with some of these people in the near future. 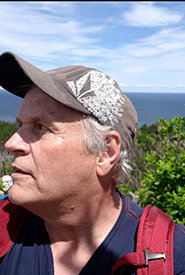