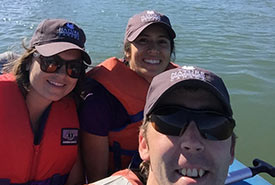 May 8, 2018 | by Students of the British Columbia Institute of Technology

We are three students in our final year of the fish, wildlife and recreation program at the British Columbia Institute of Technology. We were excited to choose Swishwash Island for our final research project because it gave us the opportunity to design a study from scratch, while also providing valuable information to the Nature Conservancy of Canada (NCC).

Swishwash Island, an NCC property, is a safe haven for wildlife in the Fraser River estuary. It is located only a few hundred metres away from one of the busiest airports in Canada. Our goal was to take a thorough inventory of the plants and wildlife on the island so that NCC can monitor how the island is being used and how it’s changing over time. 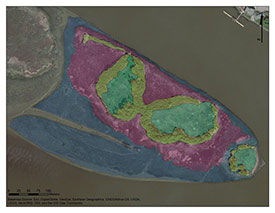 The first step in our study was to identify the different types of habitats on Swishwash Island. To do this, we used Google Earth to divide the island into four different habitat types. This allowed us to make estimates of the vegetation type and age using the colours and textures we saw in the aerial imagery, all from the comfort of home.

Our next step was to test our work, which we did with the help of a survey-grade GPS device and a scenic walk around the island. Our original estimates turned out to be even more accurate than we expected. Aerial imagery is of better quality and easier to access than ever. It is a simple, effective way for researchers to understand and monitor the landscapes in which they work. 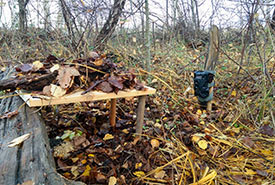 Even though Swishwash Island doesn’t seem like a remote location, access to the island is dictated by the tides and weather. One of our goals was to find out if any small mammals are present on the island. But because we wouldn't have been able to check the traps regularly, live-trapping wasn’t an option. To solve this problem, we turned to an emerging tool in wildlife research: camera traps. Camera traps are remotely activated cameras that are triggered by motion or infrared ― in this case, motion. This observation method is increasingly being used to study wildlife in remote habitats. Wildlife cameras are easy to set up, cause little disturbance to wildlife and are relatively inexpensive.

Life on Swishwash: An island oasis

Over the course of our eight-month study, we inventoried the many plants and wildlife that live on Swishwash Island. We observed a total of 78 plant species and 53 wildlife species. Some were nestled in the trees, others were flying over the marsh, and still more were basking near the shore. 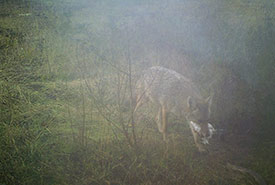 Wildlife seen out and about on Swishwash included a number of provincial species of concern. We saw the western grebe, which has the potential to become endangered or extirpated, with its striking black and white plumage and bright red eyes, as well as the sun-loving double-crested cormorant and the soaring short-eared owl, both of which are of special concern. Meanwhile, wildlife cameras installed throughout the island caught a glimpse of some of the more elusive species on our list, including coyote and North American river otter.

Conservation outlook: Lessons for the future

Through this project, we improved our skills in study design, data analysis and mapping technology. We were also able to provide NCC with the first complete biological inventory of Swishwash Island in over 15 years.

Studies like this are important to support NCC’s goal of conserving natural areas through science-based management decisions. Swishwash Island is only a small piece of land, but it is home to a wealth of wetlands, trees, birds and other animals. As urbanization continues, conserving areas like this is critically important to maintaining a healthy natural world for generations to come.

This blog was written by Shannon Cameron, Robin Greiff and Dave Muhlert.

Students of the British Columbia Institute of Technology who are enrolled in programs related to nature, wildlife and conservation contribute their knowledge and skills to provide valuable information to the Nature Conservancy of Canada.

Read more about Students of the British Columbia Institute of Technology.