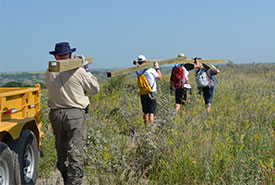 I now have another reason to appreciate time spent hiking a trail after helping out at a Conservation Volunteers event at Nature Conservancy of Canada’s (NCC’s) Fairy Hill property this summer. I should clarify that NCC manages three properties at Fairy Hill, where Saskatchewan Highway 6 cuts through the Qu’Appelle Valley, a short drive north of Regina.

For this event, about 20 volunteers joined with NCC staff to begin developing a trail on Fairy Hill Two, which covers an area east of the highway from the south lip of the valley down into marshy bottomland. It encompasses wooded coulees, native grassland and a flood plain, providing habitat for a diversity of plants and animals. The planned trail will allow visitors to enjoy the various sights, sounds and smells of this natural area.

This event was a modest beginning toward making the trail a reality, and it emphasized for me the planning and effort it takes to make just one site welcoming and accessible to visitors.

Our objective on this hot sunny day was to transport interpretive signs out to assigned locations along the trail. I use the term "trail" loosely, as it seemed to exist mainly as a dotted line on a hand-held GPS operated by our team leader, NCC intern Emily. The team consisted of volunteers Annie, Ben, Colton and me. We each carried sturdy wooden signposts weighing about 40 pounds (never did get the hang of metric weights), while Emily wrangled two signs and the GPS. Our goal was to deliver the posts and signs to two locations: a patch of tall grass and an area of bottomland. 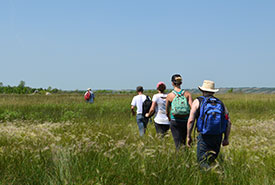 Volunteers have dropped off all sign posts and signs at their designated installation sites and are heading back to the central meeting area for a well-deserved break. (Photo by NCC)

Did I mention it was hot? The forecast high for that day was 34 degrees Celsius, and as we set out at about 10 in the morning, the temperature must have already climbed into the high 20s. Nevertheless, it was a pleasure to be one of the first to hike a barely discernable track through tall grass that yielded a surprise: a section of overgrown pavement that must have been the old highway, lazily winding its way down the side of the valley. I wonder if motorists of yesteryear enjoyed the heavily wooded view as they followed the twists and turns of the old road, in contrast to the present highway, which powers its way across the valley in a straight line, the gold standard of prairie surveying.

Did I mention it was REALLY hot? As we worked our way downhill toward the appointed locations we took a few breaks in the shade of mature tree stands. We came out of the wooded area and reached location #3, in the middle of a patch of waist-high grasses. We then doubled back, now two posts and one sign lighter, to find location #2. I can’t give you the details about location #2 because my body was telling me it was time to return to the gathering point, leaving the younger ones to finish that job. Meanwhile, another intrepid team returned about noon after delivering posts and signs further along the trail closer to the property boundary.

Sweaty and tired, we gratefully consumed the water and sandwiches provided by NCC, while sharing observations about our experiences along the way, and, I think, a sense of satisfaction in completing a necessary task. Someone mentioned that the next step would be to drill holes in the ground for the posts and erect the signs. All my fatigued mind could do was wish whoever tackles that job a cooler day, while also acknowledging all of the steps that contribute to trail making.