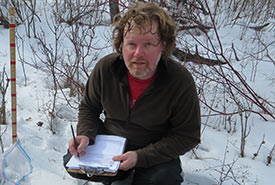 I really don’t remember many of the specifics from reading John Steinbeck’s Travels with Charley. I’m pretty sure Charley was John’s large, curly-haired poodle, which I guess is somewhat similar to my Manitoba counterpart, Cary Hamel, acting director of conservation at the Nature Conservancy of Canada (NCC), seen here (left) in shaggier days.

I remember John had a flat tire in his giant pickup truck while driving across America, like how Cary and I had a flat in our pickup while touring parts of Saskatchewan and Manitoba the other day. I’m almost positive Charley’s reason for not helping John change the tire was that he was a dog and not, like Cary, that he had injured himself just a few days ago. But John probably didn’t ask his dog for help either. We travelled the countryside in search of an elusive change in mindset, just like John and Charley. 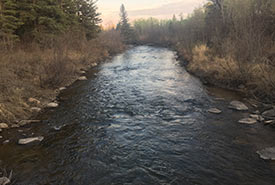 A lovely creek we came across (Photo by NCC)

We were looking for answers to questions we hadn’t thought to ask, conversations we weren’t having on our phone calls and discussions that all the flow charts we made weren’t generating. This is starting to sound like the dialogue to a terrible road trip movie starring NCC’s two tallest science guys. Anyway, Cary and I were working on a project together, looking at the importance of community pastures in prairie conservation planning. He suggested we spend part of our time driving around the Aspen Parkland Ecoregion near the Saskatchewan-Manitoba border, looking at the landscape, walking on grass, listening to birds call, eating borscht in small towns and all the other corny things you’re likely to see in your typical buddy-ecologist movie. 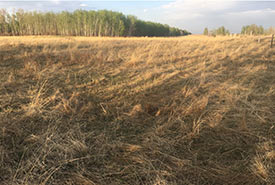 I have found this to be a good way to remove mental roadblocks. The conversations I’ve had while casually walking in the prairie or bush whacking or searching for some particular spot have often resulted in some wonderful moments of clarity. Maybe it’s the lack of distractions, or the right mix of appropriate distractions, but whatever it is, it tends to get my mouth moving, and that’s one of the ways I think. Actually, it might be the feeling of insignificance that drives me in these situations. I suddenly realize I’m just a small part of something much bigger, and I don’t need to try to generate perfect solutions. I just need to be doing something, even if it only makes a small difference. Not sure how these excursions help, but it doesn’t matter, because they do and it’s fun.

And it worked, too. Cary and I solved all the problems. We wrote them all down and called it a day, just like the folks at the Osler Restaurant do every day. Funny side story, they actually call themselves the Knights of the Round Table because the main coffee break table at the Osler Restaurant is round — crazy times in Osler. 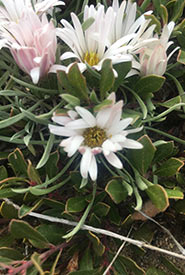 Low townsendia, one of Saskatchewan's wildflowers (Photo by NCC)

Okay, so actually, no. Problems are never solved just by one round of talking and planning, and honestly that is not the way NCC works either. We, like other leading organizations, subscribe to a system of planning that allows us to implement our idea, measure the results and take another crack at them. In this case, it means that Cary and I will probably have to take another trip to a part of the prairies better seen in person than described on paper to figure things out once we’ve got this project off the ground.

And I think John Steinbeck would approve. He wrote that “Many a trip continues long after movement in time and space have ceased.” While I think that’s true and that the memories and movements of those trips sustain us long after we get back in front of computers to peck out our ideas, it is important that we go out again and again to let those trips take us to new places. At least that’s what I’m going to tell my manager when she asks about my next road trip.

Maybe we all need a road trip to help us come to a new understanding and appreciation for a particular landscape we haven’t been to or considered before. Maybe something you see will spur you to an action you wouldn’t have considered before. Maybe you’ll just get a good story about a sunset, a stale Danish and a really friendly dog at that Esso near the giant fishing rod.